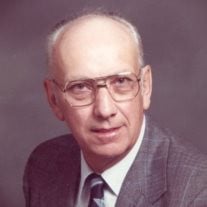 Glen Misner passed away suddenly on Saturday March 1, 2014 at his home in Calgary at the age of 92 years. Glen was predeceased by: his first wife, Lydia, in 1965; his second wife, Violet, in 2006; and his five siblings: Ernie, Lester, Chester, Victor and Mildred. He is survived by: his children Melvyn (Anne) Misner, Marilyn (Darryl) McConnell; grandchildren Brent (Jessica) McConnell, Lara Misner, Colleen (Eugene) McConnell; great grandchildren, Marina, Lochlan, Alexander and Daniel; numerous nieces, nephews, and other extended family. Glen was born on July 21, 1921 near Frontier, Saskatchewan. At the age of 14, he and his family moved to a homestead in the Rimbey, Alberta area. Glen made the move by travelling with his older brother overland in a wagon driving a string of horses. He moved to Calgary as a young man and served in the Canadian Army during World War II from 1943 until demobilization in 1946. Except for a brief stay in North Vancouver, where he found the rain less desirable than Alberta’s winter cold, he spent the rest of his life in Calgary. He built a house in Montgomery, literally by hand, where he raised his family. Glen served as a town councillor prior to the amalgamation of that suburb with the big city. He applied the electrical skills he acquired in the army to work in sales and services with an electrical contractor. Glen finished his career with the Municipality of Rockyview, an organization at which he thoroughly enjoyed his work. Glen had the good fortune of enjoying a long and healthy retirement. He was passionate about spending time with family, playing crib, gardening, maintaining his home, tinkering and travelling. His lawn was a thick carpet that he tended with care and a watchful eye for weeds and “earthworm tracks”. Being a productive gardener is no easy feat in Calgary, but Glen grew many tulips, gladiolas, lavateria, tomatoes and crab apples which he shared generously. He took many trips, particularly enjoying his Nevada trips with Violet’s extended family where he invariably, “... oh, broke about even”. A celebration of Glen’s life was held at the Calgary Crematorium Funeral Chapel in Queen’s Park Cemetery, 3219 - 4th Street NW, Calgary, AB T2M 3A6 on Saturday March 8, 2014 at 2:00 pm. An interment service and reception will be held at Queen’s Park Cemetery following the funeral service. To send condolences and view Glen’s tribute page, please visit www.lylereeves.com. If friends so desire, memorial tributes may be made directly to the Heart and Stroke Foundation at www.heartandstroke.com or by calling 1-888-473-4636. Arrangements in care of Lyle Reeves Funerals (High River, Alberta) – Craig Snodgrass (403-652-4242).

Glen Misner passed away suddenly on Saturday March 1, 2014 at his home in Calgary at the age of 92 years. Glen was predeceased by: his first wife, Lydia, in 1965; his second wife, Violet, in 2006; and his five siblings: Ernie, Lester, Chester,... View Obituary & Service Information

The family of Mr. Glen Misner created this Life Tributes page to make it easy to share your memories.

Glen Misner passed away suddenly on Saturday March 1, 2014 at...