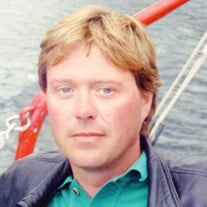 “Come weep with me, past hope, past cure, past help.” (Shakespeare) We weep for Glen Todd Ottewell, who died suddenly at home on April 25, 2020 due to cardiac arrest. Tall, blond, broad-shouldered, and handsome, Glen was the proverbial gentle giant. Glen was born in Vancouver on June 3, 1966, but, at the age of two he moved to High River, where he would spend the rest of his life in the small town setting that he so loved. He and his brother Shawn were raised on Crescent Avenue by three strong, independent, caring women: his mother, Ruth; grandmother, Myrtle; and great-grandmother, Alfreda. Glen attended Spitzee Elementary School and graduated from Senator Riley High School in 1984. That September he attended a semester of Radio and Television Arts at SAIT, where he honed his golden voice. He subsequently received a diploma in Land Agent Services in 1992 from Olds College. Despite a notoriously queasy stomach, he later chose to train as a plumber and gas-fitter, proudly attaining his Interprovincial Red Seal certification in 2004. As a youth and young man, Glen was a naturally gifted athlete who excelled at wrestling, track and field, and swimming, as well as golf, baseball, hockey, and football. Strapping on the blades or shoulder pads, Glen proved to be a towering, formidable, talented left-winger and defensive end. He was a valuable member of the Blackie Bobcats and the High River Flyers, as well as the Senator Riley Mustangs, and, for a time, the Calgary Colts. Besides sports, Glen had a life-long love affair with the Hitchin’ Post, the Calgary Stampeders, “Slapshot,” World War ll history, Remembrance Day, “SCTV,” model-building, game shows - especially “The Price is Right” (or, as he laughingly called it, “The Price is Fixed”), slot car racing, snoozes, Axis and Allies, and “Thunder Island.” Glen was a connoisseur of pepperoni pizza, Chinese buffets, ice cream, cauliflower cheese soup, and rhubarb custard pie. Never dare to offer him, fisshhh, though! He could barbecue a succulent, rare Ribeye steak; put together a delicate, toasted fried egg sandwich; slow-cook seemingly greaseless bacon; prepare perfect, fluffy French toast; assemble rich and creamy Eggs Benedict; and pop tender, buttery popcorn. Many of these culinary delights Glen made especially for Janice, his one true love. They re-connected in 1995, and Glen married his “Hunny Bunny” on November 8, 1997. His new family was completed by step-children Lindsey and Logan. Precious granddaughter “Baby Bee” arrived in 2014. No doubt Logan will fondly remember the soap box car Glen constructed, and the times they raced down the steep hill in the Okotoks Derby. No doubt Lindsey will ruefully remember the numerous times Glen awakened her late in the morning with the blaring blast of Glen Campbell’s “Rhinestone Cowboy.” No doubt Janice will never forget the breezy rides in Ed’s ‘66 convertible, the awkward dance lessons, the romantic honeymoon cruise, the unforgettable trips to sunny Mexico, the special songs, the frequent laughter, the sexy hot tubs, and the radio trivia contests. Nor will Janice ever forget the memorable backyard deck “Romeo and Juliet” balcony scene, enacted by Glen standing below her bearing a scarlet spring flower, declaring he loved her more than a hole-in-one, more than pepperoni pizza, more than a game of pool, more than plumbing, more than anything in the world. A self-described Golden Rule-er, Glen loved to bestow affectionate nick-names, quote favourite lines from movies and TV shows, reminisce affectionately about his school years, and tell entertaining tales. He was cheerful, easy-going, charming, witty, boyish, and fun. There was a certain sweetness about him. As a Gemini, Glen could be outgoing, social, and gregarious. Yet, at times, he could be the opposite: a quiet, shy, solitudinarian - more so after the flood of 2013, illness and the death of his dear mother in 2015. Sadly, his mental health was never the same. Glen’s spirit lives on, though, through his step-children Logan (Laura) Juke and Lindsey (Michael) Juke Turnbull; granddaughter Beatrix Juke Turnbull; brother-in-law Douglas C. McDougall; step-father Ed Groeneveld; brother Shawn (Lana) Ottewell; step – brothers Darrell (Glenda) Groeneveld and Travis Groeneveld; step-sister Jackie (Dave) Pope; nephew Ryan Ottewell; and nieces Emily Ottewell (Brad) and Holly Ottewell and god-daughter Keara Holmes. Glen was predeceased by his mother Ruth Ottewell; grandmother Myrtle Ottewell; great-grandmother Alfreda Koch; mother-in-law Madge McDougall;father-in-law Douglas T. McDougall; and furry friend, Hanzel. Tremendous heartfelt thanks go out to Dr. Ashref Jeeva, physician and friend, for his continued care, support, and guidance, as well as to the numerous Emergency Medical Technicians, Fire Fighters, and RCMP members who valiantly fought to save Glen’s life and support Janice in the aftermath. Also deserving of special thanks is Cynthia Malner-Charest, cherished friend, for her many and infinite kindnesses. Grief-stricken, Glen’s family and friends must face the world without him. While we lament his untimely death, at the same time we rejoice that we were blessed to have him in our lives for almost 54 years. We take solace knowing that Glen is at rest, and at peace. “Good night sweet prince; and flights of angels sing thee to thy rest.” (Shakespeare) To honour Glen’s wishes, no service will be held. Caring for the family is Lyle Reeves Funerals of High River (Craig Snodgrass) 403.652.4242.

&#8220;Come weep with me, past hope, past cure, past help.&#8221; (Shakespeare) We weep for Glen Todd Ottewell, who died suddenly at home on April 25, 2020 due to cardiac arrest. Tall, blond, broad-shouldered, and handsome, Glen was the proverbial... View Obituary & Service Information

The family of Mr. Glen Todd Ottewell created this Life Tributes page to make it easy to share your memories.

“Come weep with me, past hope, past cure, past help.” (Shakespeare)...