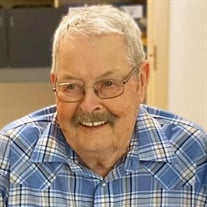 Mr. Glen Williams of Nanton, Alberta passed away at the Vulcan Long Term Care Facility on March 18, 2022, at the age of 83 years. Glen is survived by his sister Edith Warren of Vulcan, Alberta; his daughter Debbie Pearce and granddaughter Kayla Pearce of Nanton, Alberta; and many nieces and nephews. He was predeceased by his wife Helen Williams (nee: Lockton); parents John Maldwyn and Edith May Williams; infant brother James; sisters Gwyneth Poersch, Grace MacLeod, and Phyllis Jones; brothers Robert and Evan Williams; as well as several brothers and sisters-in-law. Glen was born on June 4, 1938, in Vulcan, Alberta. In 1949 the Williams family bought the J-J Ranch on the Little Bow River, and later Glen and his wife Helen took over the farm. They lived there until the Twin Valley Dam was built just over 20 years ago. At that time, they had to move up to the top of the hill and build a new farm. Glen had quite a few interests: as a young man he was in the 4-H club and then became a leader in 4-H for a few years. He was also a member of the Lions Club. He really enjoyed playing games, but mostly enjoyed crib and smear. He has taught a lot of people over the years to play cribbage, including his granddaughter, and right up until the end Glen was still playing crib in Vulcan. Approximately 3 weeks ago, Glen was joking because he played crib against Kayla and Debbie and skunked them. He laughed like crazy about it. Glen spent quite a few years working at the Rocking P Ranch for the Blades family. Glen - aka Stretch to most of the ranch crew - enjoyed his time at the ranch and loved playing crib with anyone after meals. Glen and Rod were known to get into a bit of mischief out there every once in awhile by bringing home orphaned babies back to the ranch like moose, etc. Glen and Helen also had a catering business for 25 years, which also kept them very busy in their spare time. Glen's greatest joy was his granddaughter, Kayla. He was always proud to hear what she was doing and loved having her come stay with him at the farm when he was there. After Helen passed away, Kayla would quite often go spend weekends or days off school with Papa and they would go adventuring off to see Auntie Edith, or for ice cream, or whatever direction the truck was pointed. Then, they would always have to have a game of crib. Glen will be greatly missed by all his family and friends. Memorial Donations may be made to J.T. Foster High School PO Box 610, Nanton AB T0L 1R0. A Graveside Service will be held at the Nanton Cemetery on Tuesday, March 29ᵗʰ at 2:00 p.m. Everyone is welcome. Caring for the family is Lyle Reeves Funerals of High River, Alberta (Craig Snodgrass) 403.652.4242.

Mr. Glen Williams of Nanton, Alberta passed away at the Vulcan Long Term Care Facility on March 18, 2022, at the age of 83 years. Glen is survived by his sister Edith Warren of Vulcan, Alberta; his daughter Debbie Pearce and granddaughter Kayla... View Obituary & Service Information

The family of Mr. Glen David Williams created this Life Tributes page to make it easy to share your memories.

Mr. Glen Williams of Nanton, Alberta passed away at the Vulcan...