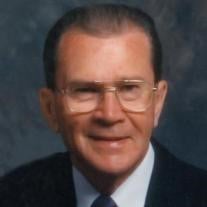 Glenn Lorne Bruce Campbell passed away peacefully at the Claresholm Willow Creek Continuing Care Centre March 2, 2012 at the age of 84. His family surrounded him as he passed into the arms of Jesus. Glenn was born April 3, 1927 in Dodsland Saskatchewan to Ernie and Ione Campbell. He moved to Saskatoon in 1944 with intentions to serve his Country in the Army. He was disappointed to learn he was too young to join, but decided he would stay in the city, where he met the love of his life, Shirley (nee: Graham) They married in 1948 and set out together on their journey through life. They had two daughters, Barbara Lynn (The Late Brent Mitchell) in 1959 and Lynda Anne (Greg Baxter) in 1962. He was the beloved ‘pa pa’ to Shannyn Creary of Duchess Alberta, and Graham Creary of Grande Prairie, Alberta, Bradley Mitchell of Langdon Alberta and Brock Mitchell of Langdon, Alberta. His grand children adored him and got to spend their lives knowing his love for each of them. He was further blessed with 2 great grand children, who he knew, and loved, Brayden and Sarah. Glenn was predeceased by his sister Ina (Gerry Magnuson) and his brother Wayne Campbell (Marlene). He leaves his nephews and their families, Curtis Magnuson of Ottawa, Blair Campbell, Warren Campbell and Guy Campbell of Vermillion, Alberta, Shane Campbell of Red Deer, Alberta and David Graham of Toronto, Ontario. He leaves his nieces and their families, Terry Gilbert of Kirkland, Washington, Linda Christensen, of Spruce Grove, Alberta, Donna Hagan of Rocky Mountain House, Alberta, Wendy Tucker of Edmonton, Alberta and Barbara Greek of Orange County, California. Glenn started his career with Massey Harris in July 1944, as office boy in Saskatoon, (which he said was the best job he ever had.) He worked his way up to the Parts and Service Department, to then becoming the Shipper for the Saskatoon Branch. Later he joined the Sales Department and was District Manager in that area until his first of many moves with his young family, to Yorkton Saskatchewan in 1963. From 1965 to 1969 he was the Regina Sales Manager. In 1979 they were transferred to Winnipeg where he was responsible to create the Distribution Order Entry (D.O.E.) for Western Canada. 1973 took them to Toronto where he set up D.O.E. for all of Canada. November 1978 he was appointed to the position of assistant to the Canadian General Sales Manager. He held that title until their transfer to Calgary in 1980. He retired there after 39 years with Massey Ferguson in March 1983. After so many accomplishments in the business world, family and friends wondered how Glenn would ever retire and live the life of leisure. He surprised everyone by leaving the work world behind and enjoying the 29 years of his retirement to the fullest. He loved golfing, curling and hunting, and spent time doing these passions, with his many friends in Calgary. In 1988 – 1989 he served as President of the Calgary Family Leisure Centre. In 2004, after 24 years in Calgary, he and Shirley lived in Millarville, Alberta then on to Nanton in 2006 where they have lived for five and a half years. In 2010, Glenn moved into the Willow Creek Continuing Care Centre where the North Unit Staff and all who knew him, treated him like family. Our heartfelt thanks goes to the Doctors, Nurses and Caregivers who made his life there enjoyable, homey and comfortable. In lieu of flowers, donations can be made to the Diabetes Foundation. A Memorial will be held at a later date. If desired memorial donations may be made to the Alberta Diabetes Foundation - www.afdr.ab.ca . Further tributes and condolences may also be made at www.glenncampbell.me

Glenn Lorne Bruce Campbell passed away peacefully at the Claresholm Willow Creek Continuing Care Centre March 2, 2012 at the age of 84. His family surrounded him as he passed into the arms of Jesus. Glenn was born April 3, 1927 in Dodsland... View Obituary & Service Information

The family of Mr. Glenn L.B. Campbell created this Life Tributes page to make it easy to share your memories.

Glenn Lorne Bruce Campbell passed away peacefully at the Claresholm...