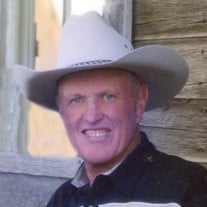 Gordon Meston passed away at the High River Hospital on April 17, 2013 at the age of 75 years. Gordon is survived by his loving wife Frances; children Randy (Kirby), Colleen (Ron) Slavik, Scott (Nola); grandchildren Keylan Meston, Ria Meston, Casey (Travis) Mytz, Kyle Slavik, Krista Slavik, Curtis Slavik, Levi Meston, Brodie Meston, Chet Meston and Peyton Meston and one great-granddaughter Leighton Mytz; brother Allen (Sylvia) Meston as well as numerous nieces, nephews, brothers and sisters-in-law. Gordon was predeceased by his parents Alexander and Georgina Meston and brother Grant. Born on a small farm near Lestock Saskatchewan on July 9, 1937, Gordon Elliot Meston began his journey through life. Gordon was the eldest son of Alex and Georgina Meston. Gordon's first job was with the Department of Highways in the Lestock/Leross districts. He then went on to work in Regina as a welder. Needing a change, he purchased a semi and this started his trucking career Gordon married Frances Faye on November 29, 1958 in Regina Sask. They started their family having three children Randy, Colleen and Scott . In 1971, he moved his family to Calgary where he sold his semi and starting working as a welder in many remote locations including the Queen Charlotte Islands, Northwest Territories and United States building some of the first service stations, pipelines and tank farms. Still trucking in his heart, in 1982, Gord, Fran and the boys purchased a trucking company which became Meston Livestock Transport, and is still owned by the family today. With many years of hauling livestock, Gord made many friends in the agricultural industry. Gord always loved the farming and ranching life style. He made this dream come true by purchasing seven quarters of land near Stettler spending the summer haying and tending to the cows. Not one to sit idle, another goal was to own a team of horses. Gord and Fran joined the Alberta Miniature Chuckwagon Racing Association. They would travel the country doing parades with his stage coach and racing his beautiful team of whites that were a force to be reckoned with. During the winter, Gord and Fran would pack up and head south, soaking up the sun and enjoying time with family. If desired memorial donations may be made to the Alberta Heart and Stroke Foundation www.heartandstroke.ab.ca . A Celebration of Gordon’s Life will be held on Saturday, April 27th at 2:00 p.m. at the High River Full Gospel Church (1802 9 Ave. SE, High River). To send condolences and view Gordon’s Tribute Page please visit www.lylereeves.com . Caring for the family is Lyle Reeves Funerals of High River (Craig Snodgrass) 403.652.4242.

The family of Mr. Gordon Elliott Meston created this Life Tributes page to make it easy to share your memories.

Gordon Meston passed away at the High River Hospital on April...