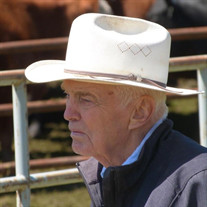 Hal Sears passed away peacefully January 3rd 2022 in the High River Hospital. Hal was born in Vancouver B.C. on Feb.21st 1928 to Harold & Mabel Sears. He was raised on the family farm NW of Nanton; he was the 3rd generation of the family there. Following his schooling in Nanton, he attended the University of New Mexico for a semester, taking engineering, before coming home to help out on the ranch with his Dad and uncle John. He married Joan Meikle in 1953 and settled in the Basin district at the base of Timber Ridge. Hal was continuously involved in ranching for more than 75 years and even after semi-retiring in 1992, he remained the roving eyes of all the operations of the boys. He was predeceased by Joan in 1976. Hal was active in the rodeo community and the Ag society in Nanton for many years. Hal enjoyed travelling and had a good memory for geography, he cultured many friends along the way. Lots of his acquaintances were acquired through his travel and involvement in the Society of Range Management and tours with the Western Livestock Journal crowd. Hal remarried the late Carol Bruce (Christie) in 1987, they later divorced in 1992. Hal is survived by his four sons and their families. Larry (Avril Chattaway), Callum (Kelty), Derek (Marlee); Rick and Susan, Jordan, Lindsay; Mike and JoAnn, Tyrell (Danielle), Whitney (Lindy) Greig; Jeff and Dode, Bailey, Jace; as well as 10 great grandkids. Hal enjoyed spending time with his grandchildren and then the great grands when they came along. About eight years ago, Hal suffered a neck injury that affected his mobility and contributed to his declining health. He spent the last few years in the Silver Willow Lodge in Nanton, then on Christmas Day he was moved to the hospital in High River. The family is grateful to his chauffeur/angel, Karen Brown Duthie, for her friendship and dedication to taking Hal nearly everywhere he wanted the last few years. We are also very appreciative of all the staff at the lodge who cared for him. The hospital was very compassionate and helpful to Hal and all of us, thank-you to the nurses and doctors who attended to him. There will be a celebration of life at a later date, likely sometime in the summer. If anyone desires to make a donation in Hal’s memory, the choice is the Nanton Ag Society, P.O. Box 157, Nanton, AB T0L 1R0. To send condolences and view Hal’s Tribute Page please visit www.lylereeves.com. Caring for the family is Lyle Reeves Funerals of High River (Craig Snodgrass) 403.652.4242.

Hal Sears passed away peacefully January 3rd 2022 in the High River Hospital. Hal was born in Vancouver B.C. on Feb.21st 1928 to Harold & Mabel Sears. He was raised on the family farm NW of Nanton; he was the 3rd generation of the family there.... View Obituary & Service Information

The family of Mr. Harold Lockhart Sears created this Life Tributes page to make it easy to share your memories.

Hal Sears passed away peacefully January 3rd 2022 in the High...