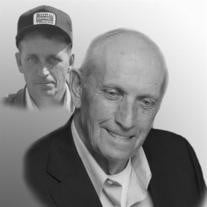 Harry Davidson passed away peacefully surrounded by his family on September 20, 2012 at his home in Longview, Alberta. Harry is survived by his beloved wife of 48 years, Doris; children Don (Kathy), Kirk (Brenda), Roxanna (Ken Harris), Trina (Steve Rowat); grandchildren, Nicole (Taylor Breckenridge), Braidy, Erin, Lexie, Bryce, Andie, Jackson, Ty, Reese, and great-granddaughter Sawyer. He is also survived by his siblings, Bill Howarth (Nancy), Fred (Maxine), Val (Ken McKain), Marvin (Norma), Rex (Jackie), Linda (Robert Williams), and Darrell (Senie); sisters-in-law June and Elaine; 36 nieces and nephews and 57 great nieces and nephews. He is predeceased by his parents Wilson (Scotty) & Esther, step-father Henry Horup, and brother Bob. Harry was born and raised in Black Diamond. He married Doris in 1964 and moved to Longview where they raised their four children. Harry was a hard worker who took pride in any job he was given. He was hired as an Operator at Western Decalta (later purchased by Pembina, then Talisman) in 1967 and retired in 2009 as a Well Site Supervisor at the age of 67. Harry volunteered his time as Chief of the Longview Fire Department for many years. He also generously offered his time, over many winters, to make ice at the Longview skating rink. Harry loved most any sport. He rode broncs at the Calgary Stampede and played a variety of team sports throughout his life. He was involved in his kids baseball and hockey and looked forward to watching his kids and grandkids in any sport they played. Harry enjoyed camping and boating. His children, and many nieces and nephews, learned to water ski and fish from his boat. Harry also loved hunting, and looked forward every fall to taking to the hills with his hunting buddies and sons. One of his greatest passions in life was salmon fishing. Harry bought his dream boat when he retired and enjoyed many fishing trips on the ocean around Victoria. The only thing he loved more than catching a salmon was watching a friend or family member catch a bigger one. Before passing, Harry expressed his gratitude and love for his family, for his friends, and for the life he had. In lieu of flowers memorial donations may be made in Harry's name, to KidSport Foothills, Box 103, Site 6, RR1, Okotoks, AB, T1S 1A1. A Private Family Memorial was held. To send condolences and view Harry’s Tribute Page please visit www.lylereeves.com . Caring for the family is Lyle Reeves Funerals of High River (Craig Snodgrass) 403.652.4242.

The family of Mr. Harry Davidson created this Life Tributes page to make it easy to share your memories.

Harry Davidson passed away peacefully surrounded by his family...