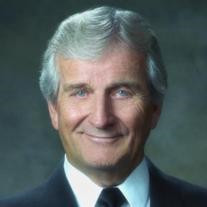 Fowler, Harry Vernon passed away peacefully at the High River Hospital surrounded by his family on April 13, 2012. Harry is survived by his loving wife Marj; children Gord (Lisa), Sue (Rob), Sandy (Eric), 4 grandchildren, 1 great grandson, 4 sisters and 2 brothers. Harry was born and raised on a farm in Halkirk, AB and served with His Majesty's Navy in the 2nd World War. Harry and Marj settled in Brooks, AB where they raised Gord, Sue and Sandy and he owned Fowler's Menswear, "Dress the man and his horse from head to toe" for 37 years. He continued to serve his community in local politics, the Kinsmen, and served on several Brooks and Calgary Municipal Boards before finally retiring to High River. After his family and friends, his loves were sailing, showing quarter horses, golf, hockey, skiing, the CFL and oh yes, talking politics. He was a great man and will be sorely missed. The family would like to thank Dr. Chris Powell and all the staff on the 3rd floor of the High River Hospital for the exceptional care that Harry received. In lieu of flowers memorial donations may be made to the Alberta Heart & Stroke Foundation www.heartandstroke.ab.ca . A Celebration of Harry’s Life was held on Saturday, April 21st at 2:00 p.m. at the Highwood Golf and Country Club - 400 7th Street NW, High River, Alberta. Arrangements in care of Lyle Reeves Funerals (Craig Snodgrass) 403.652.4242 .

The family of Mr. Harry V. Fowler created this Life Tributes page to make it easy to share your memories.

Fowler, Harry Vernon passed away peacefully at the High River...