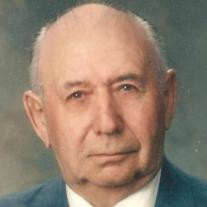 Harvey Meacham Read passed away peacefully on October 13, 2012 at the Vulcan Extendicare. Harvey was the son of Walter Harvey Read of Iowa and Annie Estella Read (nee Meacham) of Winnipeg. He was born in their farm home east of Nanton on December 27, 1922. He and his sister Eileen attended Round Mount, a country school and he later rode the school bus to Nanton Consolidated School. Harvey was married to Phyllis Miner whose family lived west of Nanton on March 12, 1942. They had one son Errol who was born on March 29, 1944. On August 13, 1942 during WWII, Harvey was sworn into the Royal Canadian Air Force and was sent to Edmonton to train in September, 1942. He was stationed in Calgary, Edmonton, Brandon, Winnipeg, Montreal, Vancouver, Port Hardy, Port Alberni and Boundary Bay. He worked in Dome Control as a wireless operator. He was discharged on July 30, 1945 and returned to the farm to work for his dad. Being away so much during the war took its toll on the marriage and he and Phyllis were divorced. On June 27 he married Eileene FitzPatrick of Vulcan at Knox United Church in Calgary. They had one daughter Dianne born on October 26, 1949. They remained on the farm until they moved into a house in Nanton in 1992 and later to Silver Willow Lodge also of Nanton in 2008. In 2010 he moved to Little Bow Continuing Care at Carmangay and remained there until it closed and he went to Vulcan Extendicare in August of this year. Harvey was predeceased by his dad Walter Harvey read and his mother Annie Estella Read; his sister and brother-in-law Eileen and Ross Kennedy; grandson William Daniel Halbert and just this past February his wife Eileene. He is also predeceased by his wife’s sister and husband Lorraine and Bill Fletcher and brother-in-law Charlie FitzPatrick. He is survived by his son Errol (Marsha) Read and grandchildren George (Marie) Read and their children Valerie and Daedia; Margaret (Ken) Parker and their children Sky, Chancellor and Matthew; and his daughter Dianne (David) Halbert and their children Glen (Annette) Halbert and their children Tanner and Corbin, and Darlene (Dana) Lafreniere and their children Hayden and Kaitlin and a nephew Gary (Judy) Kennedy and his children Clinton, Kurtis and Kandie and their children. If desired memorial donations may be made to the Nanton Baptist Church (Box 635, Nanton, T0L 1R0) or the High River Cancer Centre (560 9th Ave. SW, High River, T1V 1B3). A Graveside service was held on Wednesday, October 17 at the Nanton Cemetery Columbarium at 1:15 p.m. A Memorial Service followed on Wednesday, October 17 at 2:00 p.m. at the Nanton Baptist Church. To send condolences and view Harvey’s Tribute Page please visit www.lylereeves.com . Caring for the family is Lyle Reeves Funerals of High River (Craig Snodgrass) 403.652.4242.

Harvey Meacham Read passed away peacefully on October 13, 2012 at the Vulcan Extendicare. Harvey was the son of Walter Harvey Read of Iowa and Annie Estella Read (nee Meacham) of Winnipeg. He was born in their farm home east of Nanton on December... View Obituary & Service Information

The family of Mr. Harvey Meacham Read created this Life Tributes page to make it easy to share your memories.