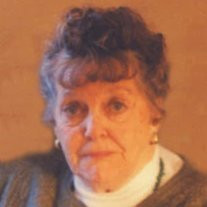 Mrs. Hazel M. Henheffer passed away peacefully on May 24th, 2013 at the Willow Creek Continuing Care Centre in Claresholm, AB at the age of 90 years. Hazel is survived by her son Alan (Pam), daughter Jill (Bruce), grandchildren Jodi (Jeff), Rod (Sue), Reannon (Ryan) and Jim (Brandi). Also survived by great grandchildren Joel, Clayton and Abby Dawson, Iva and Sawyer Henheffer, Madalynn, Hudson, Elizabeth and Marshal Walker, and Sarah and Reid Henheffer. Hazel was predeceased by her parents Ava and Albert Wallin, husband Floyd Henheffer, sister Louise Minor, and brother Ralph Wallin. Hazel was born with an inquiring mind and a strong sense of independence and adventure, and throughout her life those qualities were at the root of most of her actions, decisions and ambitions. In her early years, she wanted to become a pilot – not a typical choice of vocation for a young woman from small town Saskatchewan in the 1930’s – and had resources been available, she would no doubt have achieved that ambition. In later years she wrote columns for the Calgary Herald, taught school, raised purebred Murray Grey cattle, and launched her own real estate company at a time when very few women were involved in that industry in any capacity. Although she spent the majority of her life in Alberta, where she married Floyd, raised two children, and became the grandmother of 4 and the great grandmother of 11, her heart and spirit remained fiercely loyal to Saskatchewan, and woe to anyone who dared to criticize or speak in jest about the land, the people, the politics (except maybe for Grant Devine), or the Roughriders. She was a child of the prairies, and though she grew up on a farm during the double catastrophes of drought and the Great Depression, those experiences shaped her but did not extinguish her spirit or sense of fun. She worked hard all her life, but always found time and energy to entertain family and friends, and share meals, music and laughter. Hazel had a wide circle of friends, of all ages, partly because she had many interests herself, but also because she was very interested in others, and loved to learn from their knowledge and experiences. To be a member of Hazel’s family, or a close friend, meant a lifetime of unconditional loyalty and support. Her strength and resilience during difficult times was only matched by her sense of playfulness, and the ability to find joy in small things. A Private Family Service has been held. Caring for the family is Lyle Reeves Funerals of High River (Craig Snodgrass) 403.652.4242.

The family of Mrs. Hazel Marie Henheffer created this Life Tributes page to make it easy to share your memories.