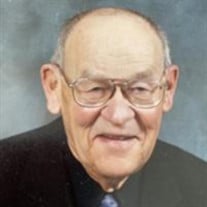 Mr. Henry Fehr of High River, AB passed away on February 25, 2021, at the High River Hospital at the age of 89 years. Henry is survived by his wife, Margaret; daughters, Terry Fehr, Linda Fehr and Shannon Fehr; grandchildren, Josh Elliott (Sarah), Sean Elliott (Nancy), Kiara Elliott (Brandon), Abraham Lancaster (Kara), Nolan Lancaster, Sam Patterson (Ember), Kieran Patterson, and Griffon Fehr; great grandchildren, Owen Elliott and Jasper Lancaster. Henry was predeceased by his parents, Abram and Helena Fehr and his stepmother, Susie Fehr; siblings, Jake Fehr, Helen Fehr, John Fehr, Marie Neufeld, Isaac Fehr, Pete Fehr and son; Myron Fehr. Henry was born at his family’s farm south of Swift Current, SK. At the age of 14 years, he was sent to boarding school in Three Hills AB. He completed his high school in Caronport, SK, and his first year of Normal School in Moose Jaw, SK. It was while teaching in Wymark that he met Margaret Wiebe. They were married in Swift Current on August 15, 1953. Henry was welcomed as a son and brother into Margaret’s family, and his absence will be felt by her siblings, Ed Wiebe (Cecile), Cathy Gerein (Austin) and Leonard Wiebe (Grace). Over the years that followed, while continuing to teach, and with Margaret’s unfailing support, Henry continued his education and eventually completed his Bachelor of Education degree in 1963. Henry taught school for more than 30 years in various locations in Saskatchewan including Cedar Hill, Brock, Wymark and Swift Current. His years at O. M. Irwin and the Swift Current Comprehensive High School were busy and rewarding. Many former students will have fond recollections of his wry sense of humour, his love of football and his commitment as trainer to the SCCHS Colts football team. Henry was a respected professional and enjoyed the friendship of many colleagues. In 1964, Henry and Margaret with their two oldest children moved to Swift Current, SK and purchased their first home - the home in which they lived until they moved to High River, AB in 1996. This home was an ongoing labour of love and a creative expression of their commitment to one another. Together, Henry and Margaret completed hundreds of projects, both in and outside their home in Swift Current. Together, they designed large and small home improvements and learned how to bring them to life (all this without the benefit of Google). Henry was active in his community of Swift Current, serving as president of the local band parent’s association as well as president of the music festival association. He was also treasurer at Bridgeway Community Church. As with everything else in their lives, Henry and Margaret joyfully shared these tasks, complementing one another’s strengths and areas of skill. In 1996, Henry and Margaret embarked on a new adventure. They moved to High River, AB. Their new home in High River became the beneficiary of their combined and accumulated expertise. They became active members at Trinity Mennonite Church and continued to expand their circle of friends. Henry was an avid carpenter and could frequently be found in the garage building toys and furniture using recycled materials. Friends and family could count on ‘Hank’ to provide assistance in their projects as well. He continued to love football and was a committed Saskatchewan Roughriders fan. As I write this, I am sitting in his chair in the study and imagining how many pleasant hours he spent here watching ‘the game’. One of the great loves of Henry’s life was singing, especially barbershop, and he passed this love of music on to his children and many of his grandchildren, investing endless time and energy in their musical education. Henry was simple and honourable man, a Christian in the Mennonite tradition. His faith was the cornerstone of how he lived his life – a life of love, steadfastness and stewardship. He loved God. He loved Margaret. He loved his children and grandchildren. His love, fearless and kind during his life, will continue to burn bright in our hearts and hearths. We will miss him… a lot. A private Funeral Service will be held on Friday, March 5, 2021 @ 2:00 p.m. at the Trinity Mennonite Church. At that time, the public can access the Trinity Mennonite Church's Facebook Group to watch the service live, https://fb.me/e/4eFaOyIfY. Caring for the family is Lyle Reeves Funerals, Inc. (Craig Snodgrass) 403.652.4242.

The family of Mr. Henry Fehr created this Life Tributes page to make it easy to share your memories.