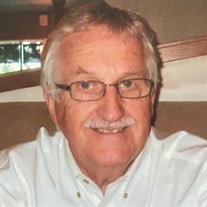 With profound sadness our family announces the death of Henry Victor Friesen, on September 11th, 2020 in the High River Hospital. With family members present he was surrounded by love. Henry was born September 3, 1935 in a log cabin in Fitzmaurice,... View Obituary & Service Information

The family of Rev. Henry Victor Friesen created this Life Tributes page to make it easy to share your memories.

With profound sadness our family announces the death of Henry...