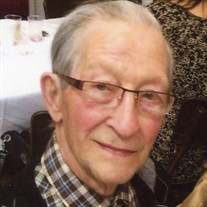 Honore Simard of Cluny, Alberta passed away at the High River Hospital on January 28, 2021 at the age of 97 years. Honore was born in Cluny, Alberta on January 29, 1924 where he spent his early years. He left school before graduating to help his Father “Joe” operate a local grain elevator. He worked at various jobs in the Cluny area until he joined the Canadian Army in 1943. After completing his training in Camrose and Camp Borden in Manitoba he sailed for England on the Queen Mary. He proudly served his country in Italy, France, Germany, Holland and Belgium until the end of WWII. In November of 1945 he returned to Canada on the Queen Elizabeth. Upon his return to Cluny, he worked in the family dairy business until 1951 when he was then employed on the local provincial highway maintenance crew. In June of 1954 he took over as the Cluny Postmaster where he worked until his retirement in 1986. As his parents aged, Honore became the primary caregiver for his Mom and Dad which allowed them to live out their last days in the family home in Cluny. After his retirement he enjoyed a quiet life in Cluny which was enhanced when he moved into his dream home on his farm atop the hill a mile east of town. Honore lived a quiet life there where on a clear day he enjoyed a view extending to the Rocky Mountains in the west. He subsequently moved to a retirement home in High River in September of 2017. Honore will be remembered as a quiet, hard working gentle man with a smile for everyone. Honore is survived by three sisters; Aurette “Pat” (Allan) Schikosky of Calgary, Mary Sanders of Tamworth, Ontario, Carole (Bruce) Clark of High River; brother John (Joey) of High River; sister-in-law Joyce of Alix as well as numerous nieces and nephews. He was predeceased by his brothers Joe and wife Aileen, August “Gus”; sister Jeanette Arbeau and her husband Larry; brother-in-law Stewart Sanders and niece Joanne Kaiser. The family would like to thank his family doctor Joni McNeely of Strathmore for her many years of kind and compassionate care; Dr. Ashref Jeeva – his family doctor in High River for his gentle and understanding care; the staff at Seasons Retirement Home in High River for their dedication and support and the 3rd floor staff at the High River Hospital for gentle and thorough care in his final days. A Private Family Graveside Service will be held at the Ouelletteville Cemetery near Cluny. Caring for the family is Lyle Reeves Funerals of High River (Craig Snodgrass) 403.652.4242.

Honore Simard of Cluny, Alberta passed away at the High River Hospital on January 28, 2021 at the age of 97 years. Honore was born in Cluny, Alberta on January 29, 1924 where he spent his early years. He left school before graduating to help... View Obituary & Service Information

The family of Mr. Honore Simard created this Life Tributes page to make it easy to share your memories.

Honore Simard of Cluny, Alberta passed away at the High River...