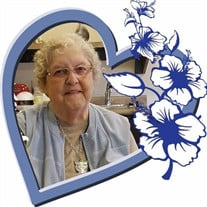 Ingrid Hansen of High River, Alberta passed away peacefully on August 10, 2018 at Seasons Retirement Home in High River at the age of 85 years. Ingrid is survived by her sons Gordon (Pam), Michael (Bonnie), & David (Deb) and daughter Karen Anderson; Grandchildren Todd (Kristina), Terra (Justin), Megan (Trevor), Chris (Mel), Cody (Tegan), Alexandra, Danielle, Michaela, Amanda (Cody) and Andrea; Great Grandchildren Dakota, Skyler, Angie, Tristan and Rylan. Ingrid was born in Copenhagen, Denmark in 1932 and was an only child, raised by her mother, Agnete Larsen. Ingrid grew up through the horrors of World War II with the help of her Family in Copenhagen. After graduating High School, Ingrid and a friend travelled to London, England where she worked as a Telephone Operator. Never shy to look for adventure, she then made her way to Sonderstrom, Greenland where she continued her career as Telephone Operator and worked at the DEW Line Site there for a while. She made her way back to Copenhagen while she waited for her travel documents to come through that would allow her to move to Canada in 1956. She was never scared of travel and adventure and this allowed her to make her way by rail across Canada from Montreal to Edmonton. Her first job in Canada was as a Domestic for the George Poole Family (PCL Construction founder) but this proved to be a little boring for this lady so she found work as a Nursing Assistant at the University Hospital in Edmonton. Shortly after emigrating to Canada in 1956, she joined the Scandinavian Center in Edmonton where she met her future husband, Gynter Hansen, another immigrant from Denmark. They married in October of 1957 and shortly after that, in November of 1958, Gordon was born, Michael was born in October of 1960 and David followed in March of 1963. In 1967 the adventure continued as they moved their Family up to Hay River in the Northwest Territories. Karen was born there in April of 1968. Ingrid worked in Hay River as a Telephone Operator at CN Telecommunications (NorthwesTel) for years and was well liked as a great Co-worker and friend. Ingrid and Gynter moved up to Yellowknife in the fall of 1980 and unfortunately, Ingrid left to move back to Hay River on her own in 1983. She lived in Hay River for a couple of years raising Karen on her own before leaving for the bright lights of Edmonton once again. The 80’s were not nice to both Ingrid and the Alberta economy, so in 1988, Ingrid made her way back North again, this time to Yellowknife. She found work with the Territorial Government and stayed in Yellowknife until her retirement in 1998. She moved to High River, where Mike and Bonnie were living and made a comfortable home here, but only for a while. Ingrid was soon bored and longed to be around more of her family, so in 2000, she moved back up to Edmonton where she was surrounded by lots of Family and made herself a load of friends in her home at Ansgar Village, a mostly Danish Seniors Apartment in Downtown Edmonton. Ingrid’s health had been a constant source of concern and in 2016, she made a tough decision to give up much of her independence and move to an Extended Care Home. She researched various places and selected Seasons Retirement Home in High River. When she first moved in to her Room, Rosegate B102, Ingrid struggled with the thought that she could no longer control her life and she did not know how she was going to survive this radical change to her lifestyle and independence. It took her a while, but soon she met other residents here at Seasons and she became close with most of the Staff, these very quickly became her new Family and while her own family still loved and cared for her, their lives were also scattered around while they were on their own adventures. Ingrid was so very fortunate to have the Friends here that I believe she was proud to call her extended family and know that all of her Family are thankful for the help and support that Ingrid received since moving into her final home. She especially enjoyed working in the Tuck Shop which usually ended up being a gab session with friends, playing bingo (for cash if possible) and knitting. She will be missed by so many people that she has touched with her wit, humour and adventurous spirit throughout her long life. We will all miss her. A Celebration of Ingrid’s Life will be held on Saturday, August 25 at 3:00 p.m. in the Heritage Hall at Seasons Retirement Home, 660 - 7th Street NW, High River, AB. If you would like to send donations, please consider the Canadian Diabetes Association, www.diabetes.ca. To send condolences and view Ingrid’s Tribute Page please visit www.lylereeves.com . Caring for the family is Lyle Reeves Funerals of High River (Craig Snodgrass) 403.652.4242.

The family of Mrs. Ingrid Andrea Marie Hansen created this Life Tributes page to make it easy to share your memories.

Ingrid Hansen of High River, Alberta passed away peacefully on...