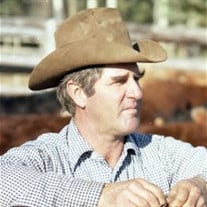 In true Stuart Robertson fashion .......“up and gone before the break of dawn”. It is with great sadness that we share the news of our father’s passing peacefully in his sleep in the early hours of March 4, 2019 at the Rising Sun Long Term Care Centre in Black Diamond, Alberta at the age of 88 years. Stuart was a third generation Alberta rancher born on January 15, 1931 to Angus and Margaret Robertson. He was the eldest to two younger sisters raised on the AC Ranches homestead west of Airdrie. Stuart attended high school at St. Mary’s in Calgary, excelling on the football field. He also attended Campion College in Saskatchewan but it was at St. Mary’s that he met Helen Arbour and they married on July 5, 1952 and went on to raise six children. In 1966 Stuart purchased land in the Black Diamond area and in 1970 sold that place and moved west of Turner Valley. In 1984 after attending a land auction on a whim, Stuart and Helen, along with their two youngest children, found themselves operating AC Ranches at Tees, Alberta. After Helen’s passing in 2000, Stuart decided to move back south to High River, closer to most of his children. Stuart and Helen were pioneers in the history of Salers cattle in North America and were among the first to travel to France and import cattle back to Canada. Stuart served as President of the Salers Association of Canada from 1977 – 1979 and 1990 – 1991. AC Ranches was widely recognized as one of the premiere herds in North America exhibiting their cattle with much success in shows on both sides of the border and marketing their genetics in the U.S., Mexico, South America, Australia and New Zealand. In 1996 Stuart and Helen were awarded with Honorary Life Memberships in the Salers Association of Canada. In addition, the Robertson family was honored in 2003 by the Friends of the Bar U Historical Ranch Association with the Heritage Ranching Family Award in recognition of their contribution and support to the development of the ranching industry in Western Canada since 1881. Stuart was involved in his community and his children’s lives as a hockey coach, 4-H leader and school sports’ enthusiast. He and Helen enjoyed travelling to France, Scotland, East Asia, Australia, New Zealand and Mexico but they especially enjoyed their trips to Maui. He was also a keen golfer, curler and card player. Stuart is survived by his children Susan (Wayne) Stewart, Sandra Kimmel (Bob Tiegs), Anne (Rich) Boswell, Graham (Joani) Robertson, Mary Kate Robertson (Alvin Pawlitza), Joan (Kris) Coleman; his sisters Peggy Jean Barr, Sheila (Lloyd) Conn; his sister-in-law June Townley; his grandchildren Katherine Stewart (Scott Fischer); Colin (Jennifer) Stewart; David Stewart; Meghan (Jim) Hoffman; Stuart Boswell, Mark Boswell, Raven Robertson, Cole Robertson, Julia Pawlitza, Alex Pawlitza, Georgia Pawlitza, Anthony Coleman; his great-grandchildren MaKayla Hoffman, Callum and Jacqueline Stewart, James Fischer and numerous nieces and nephews. Stuart was predeceased by his wife Helen, his grandson Fletcher Kimmel, his brothers-in-law Chris Barr, John Townley, Frank Hickey; his sister-in-law Donna Hickey; his nephew John Townley, his nieces Brenda Simmonds, Donna Hickey. Dad was an honest, hard working man who conducted business on a handshake. He along with Mom set a wonderful example for us and we feel privileged to have been raised by such wonderful parents. Stuart’s life was celebrated on Saturday, March 9, 2019 at 11:00 am at St. James’ Catholic Church, 338060 – 32 St. E., Okotoks, Alberta. In lieu of flowers the family asks that donations be directed to STARS Air Ambulance, 1441 Aviation Park NE, Box 570, Calgary, Alberta T2E 8M7 www.stars.ca To send condolences and view Stuart’s Tribute Page please visit www.lylereeves.com . Caring for the family is Lyle Reeves Funerals of High River (Craig Snodgrass) 403.652.4242.

The family of Mr. J. Stuart Robertson created this Life Tributes page to make it easy to share your memories.