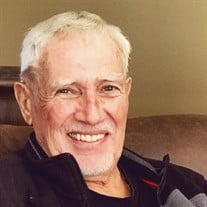 Jack Gemmell of High River passed away peacefully on July 26th with family by his side. Jack was born in Edmonton AB to Iona and John Gemmell. He was the second born of eight brothers and sisters. Jack took Instrumentation Technology at NAIT in Edmonton then shortly after graduation moved to Calgary with wife Sharon and son Brad. After buying his first house in the Penbrooke Meadows community of Calgary, daughter Leah was born. He then moved the family to an acreage south of Calgary in 1974 and became a gentleman farmer with chickens, turkeys, rabbits, a horse and of course Helen the cow. The ensuing years brought forth a lifetime of adventures, child rearing, Christmas celebrations, social gatherings and lots of planning hatched by Sharon, then implemented by Jack. Sharon and Jack left the acreage to build their dream house overlooking Cottonwood Golf Course in 1994. In 2008 they sold their home and moved to Polo Park in High River for another chapter of their lives. In every location they became an integral part of their community. Jack especially enjoyed golfing. Not only was he a gentleman farmer he was also a gentleman golfer. After Jack’s loss of Sharon in 2018 he started a new journey with his partner Linda. During this time Jack enjoyed travelling and simply enjoying life. Jack will be especially missed by the many lifelong friends around the world that he met during his many years of travelling. Jack is survived by his son Brad (Dawn), daughter Leah (Chris), partner Linda, grandchildren Jaxen, Keighan, Colby and Molly, sisters Elaine (Rollie), Joyce, Cathy, brothers Gordon (Wanda), Gerrie (Lorraine), Roger (Val) plus numerous nieces and nephews. Jack was predeceased by his loving wife, Sharon, both parents, John and Iona, brother Ron, and brother-in-law Tom Mohr. The family would like to thank Lyle Reeves Funeral home, the doctors and nurses at the High River Hospital, the High River Ambulance Service, and local Fire Department for their amazing and compassionate care of Jack in his final days. A celebration of Jack’s Life was held at the Highwood Golf and Country Club on September 12, 2021. In lieu of flowers we ask that donations be made to High River District Health Care Foundation, specifically the Cancer Center as Jack was very supportive of this kind of care coming to High River. Caring for the family is Lyle Reeves Funerals of High River (Craig Snodgrass) 403.652.4242.

Jack Gemmell of High River passed away peacefully on July 26th with family by his side. Jack was born in Edmonton AB to Iona and John Gemmell. He was the second born of eight brothers and sisters. Jack took Instrumentation Technology at NAIT... View Obituary & Service Information

The family of Mr. Jack Alexander Gemmell created this Life Tributes page to make it easy to share your memories.