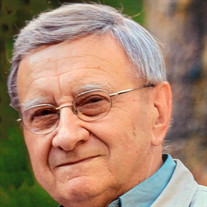 Mr. Jack Keller of Didsbury, Alberta passed away on July 6, 2021 at the Peter Lougheed Hospital in Calgary, Alberta at the age of 90 years. Jack is survived by his daughter Tammy; sons Jacob, Randy, Wayne, Joe (Debbie) and Paul (Vera); grandchildren Chad, Tyler, Randi-Linn, Kimberly, Kourtney, Christopher, Sean, Ryan, Aaron, Maja, nine great grand-children, and his sister Anna Walz. Jack was predeceased by his son Walter Keller, parents John & Rose Keller, brother Leo Keller, and sisters Clara Vetter and Cecile Ryberg. Jack was a man of so few words but yet said so much. He was born in Macklin, Saskatchewan as the eldest of 5, who did not carry on the tradition of farming but went on to live his passion of being a mechanic. Jack’s Automotive was known far and wide as the place to go to get your vehicle repaired. He was fair, he was honest, and he treated every single person that came through his door with respect. Jack was the father of 7 children and for a vast time he was a single father who raised a family and ran a business the very best he knew how. His legacy is the family that is carrying on the values and lifestyle that he knew best. Jack had many hobbies and interests that filled his life. He liked to build things, from small simple projects to his own motorhomes. Jack found extreme pleasure in music, and taught himself to play the piano, trumpet, clarinet, and guitar. His happy place in the later years of his life was writing out and playing music. He also enjoyed getting together with his friends and playing a good game of canasta among other card games. Jack didn’t tell anyone how to live their lives, he lived his life and let others watch him do it! Memorial Donations can be made to the Canadian Cancer Society, www.cancer.ca. A Funeral Mass was held on Monday, July 12, 2021 at 1:00 p.m. at St. Francis De Sales Catholic Church in High River, 206 – 9th Avenue SW. The Service will be live-streamed at www.francisdesaleshighriver.com. Please click the livestream tab. Caring for the family is Lyle Reeves Funerals of High River (Craig Snodgrass) 403.652.4242.

The family of Mr. Jack Keller created this Life Tributes page to make it easy to share your memories.