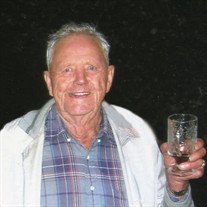 Jim passed away peacefully surrounded by loved ones at the High River Hospital on December 28, 2020 at the age of 98 years. Jim is survived by his beloved wife Barbara, daughter Laura Lee Gardener, son Perry Andersen (Terri), Grandson Ashley Roger Gardener, Granddaughter Kelsey Lee Gardener and Great-Granddaughter Frankie Lee Wilde; Son-in-law Malcolm (Sandy) Gardener; as well as Step-Grandchildren, Amy (Josh) Donald, Lindsay (Kevin) Knight; and Step-Great-Grandchildren Neela, Trayden Donald & Colin & Lydia Knight. Jim was predeceased by his parents, Mads & Laura Andersen; siblings Chris, Alta, Mina, Dee, Jeannette, Mary, Max & Clarence. Jim was born in Magrath to Danish parents, Mads Peter and Laura Andersen; some of his 8 siblings were born in Denmark before the family immigrated to Canada. When Jim was 11 years old, they drove horses and wagons from Magrath all the way up to Peace River country, a journey that took six weeks. They were driving 15 head of cattle and that many horses as well. They tried homesteading but it was too difficult due to dense bush, muskeg and mosquitoes, so they moved on to Valleyview. During Jim’s ten years up north, he walked four miles to school as the horses had died with swamp fever. Jim was 21 when he finally took a Greyhound bus back to Magrath; his mother had already moved back. Mads stayed up north; his parents never lived together again, but Mads would come down to Magrath when he could. In 1943, World War II was taking place, so Jim joined the Navy where he served for the next three years until the war was over. Training was done in Cornwallis so he took the CPR train across Canada to Nova Scotia. They stopped along the way picking up more people and by the time they got to Nova Scotia, there were thousands of sailors on the train. After training in Cornwallis, Jim was stationed in Halifax while training as a Gunner on the defensive equipped merchant ships, and then was sent to Portland, Maine. Jim served on two different merchant ships that hauled goods all over the world; sailing in the United States, twice through the Panama Canal, South America, Trinidad, Celone, India, Africa and Australia. He had 341 days of overseas service (9 months on one ship) and served 794 days in the Navy. Jim met Barbara in 1950 when they were both on a sightseeing trip to Waterton. Barbara was working as an R.N. at the Galt Hospital in Lethbridge at the time. In 1952 they were married in Barons and lived in Magrath first, then Vauxhall. They were married for 68 years; a true love story that survived through thick and the thin. Barb was Jim’s ‘everything’. While Jim was working for the PFRA in Vauxhall, he heard about a blacksmith shop for sale in Blackie, so he purchased the shop and they moved to Blackie in 1955 where he worked for the next 50 years. Everyone knew ‘Andersen’s Blacksmith and Welding Shop’ with the crooked wooden floors, the belt-driven hammers, and the big anvils and forges. This was a place where folks would stop in to say hello. Farmers would stop by to have work done, kids were there because it was an interesting place; and they were always welcome. Jim had friends of all ages; he was quite a character. A couple of years after buying the welding shop, Jim bought a school bus from Milo Stier and drove a bus route for 30 years. Jim and Barb talk about how the Blackie community welcomed them and how they spent many wonderful years there with lifelong friends. Jim enjoyed fishing in his boat in the summer and hunting in the fall. They both enjoyed camping with their truck and camper and one year they travelled with Warren and Shirley Collard all the way to Alaska and back. Eventually Jim & Barb purchased a home in High River where they enjoyed many good years before moving to Seasons Retirement Village. No matter where Jim was, he loved to have a rum and coke during ‘happy hour’ with his family or friends. To the man we call J.P. … a finer man we will never know…. rest in peace knowing you were loved by so many, far and wide. We will miss you so very dearly. In the absence of a gathering, the family would appreciate folks leaving a comment on the Tribute Wall about how you knew J.P. and how he touched your life. A Celebration of Life was held on Sunday, August 29th at 2:00 p.m. at the High River Royal Canadian Legion Branch #71, 25 - 8th Avenue SE, High River, Alberta. In lieu of flowers, donations can be made to the Royal Canadian Legion Branch #71, 25-8th Avenue SE, High River, AB T1V 1E8, etransfer to [email protected] . Caring for the family is Lyle Reeves Funerals of High River (Craig Snodgrass) 403.652.4242.

The family of Mr. James Peter Andersen created this Life Tributes page to make it easy to share your memories.

Jim passed away peacefully surrounded by loved ones at the High...