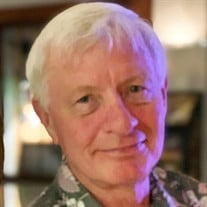 Doug leaves behind his wife of 48 ½ years, Cathy; Children and Grandchildren; Michelle (Glen); Mike (Ashley); Jimmy - Amy, Izak, Owen; Barb – Rosie, Charlie, Tucker, Chewie, Karma, and Lena. Doug was born in Mission City, British Columbia and came to High River shortly after. He comes from a family of 11 brothers and sisters. He began his plumbing career in the late 1970’s at High River Plumbing & Heating and started his own business, Bradley’s Mechanical in 1980. He has been busy in the High River community ever since. He was the kind of man, that if you called weekends or nights, he would go “fix the problem” and many times at no charge. Doug loved sports and hockey was number one, even though he started playing late in life – he was such a lover of the game. He would play in the annual Boxing Day Tournament – sometimes six games in one day! He was playing hockey in August of this year. Doug loved baseball, played pickleball, any kind of street hockey and of course loved all water sports. He was an amazing water skier, wake boarder, air chair, knee boarder and taught many, many, many children over the years how to knee board, ski, anything they wanted to learn. The boat would go from sunrise to sunset pulling any of his little children fan club. His most memorable time was spent at his favourite lake, Dickie Lake. Doug loved to dance and was an incredible dancer. Doug and Cathy hosted three celebrations for milestone anniversaries, their 25th, 40th and 45th and danced the nights away. When you think and talk about Doug, the one phrase that all say is, “He is the kindest man I know”, “Would give you the shirt off his back”, “Do anything for anybody”. At Doug’s request, there will be no funeral. A “Tribute” to Doug’s life was held on Sunday, October 11th at the Royal Canadian Legion Branch #71, 25 – 8th Avenue SE, High River, AB. In lieu of flowers, a Go Fund Me page has been set up in Doug’s name, so we can do “Acts of Kindness” for people in our community. https://gf.me/u/y2hfn4. We accomplished our first act of kindness in our community, by providing a teen with a new bed and grocery voucher. Caring for the family is Lyle Reeves Funerals of High River (Craig Snodgrass) 403.652.4242.

The family of Mr. James Douglas Bradley created this Life Tributes page to make it easy to share your memories.