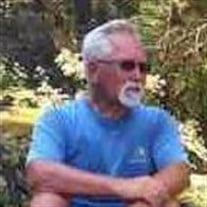 Jim Fiddler of Priddis, Alberta passed away on October 12, 2015 at the Foothills Country Hospice in Okotoks, AB at the age of 65 years. Jim is survived by his wife and soulmate Joan; their children Jessie (Vince) Kiss, Joseph Fiddler. Jim's other two children are Cole Fiddler and Shaness Fiddler. Jim is also survived by his sister Patricia Wadlow, brother Orville (Carol) Fleming, Uncle Paul (Joyce) Hanson; father and mother-in-law, Les and Doris Gordon. He also has many Grandchildren; Lesly, Alyxandra, Pamela, Alissa, John, Ryan, Christian, Liam, Juniper, and Rosza; . He is also survived by sisters-in-law, Barbara Gordon, Kathy (Mel) Lyster, Wyann Gordon, brothers-in-law Michael (Susanne) Gordon and Glenn (Donna) Gordon and many nephews and nieces and cousins. Jim was predeceased by his loving parents John & Caroline Fiddler, and brother-in-law Gerry Wadlow. Jim was born in Prince Albert, Saskatchewan where he grew up and spent his childhood. He attended college in Saskatchewan and articled as a chartered accountant. In 1980 Jim moved to Edmonton where he met his wife Joan a started their life together. As well as his accounting background, Jim's career lead him to the path of VP of Information Services for the last 30 years until retirement. Jim’s first love was his family. He loves his wife and took great pride in watching his children grow up. He spent many hours on the soccer field, ball fields, hockey arenas and dragging them all behind the boat. He loved each and every one of his grandchildren and enjoyed their visits. Jim was also passionate cars, boating and spending time at the lake with his family and friends. Music was a great past-time for Jim and for many years he played in a band called the Evening Post. A Celebration of Jim's Life was held at the High River United Church, 123 Macleod Trail SW, High River, Alberta T1V 1P8 on Tuesday, October 20th, 2015. Memorial Donations can be made to the Foothills Country Hospice, P.O. Box 274, Okotoks, AB T1S 1A5. www.countryhospice.org To send condolences and view Jim’s Tribute Page please visit www.lylereeves.com . Caring for the family is Lyle Reeves Funerals of High River 403.652.4242.

Jim Fiddler of Priddis, Alberta passed away on October 12, 2015 at the Foothills Country Hospice in Okotoks, AB at the age of 65 years. Jim is survived by his wife and soulmate Joan; their children Jessie (Vince) Kiss, Joseph Fiddler. Jim's... View Obituary & Service Information

The family of Mr. James (Jim) LeRoy Fiddler created this Life Tributes page to make it easy to share your memories.