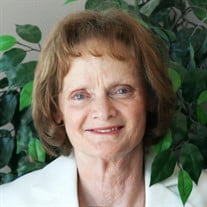 Mrs. Janet Nash of High River, Alberta went home to be with her Lord and Savior on January 17, 2020 at the age of 76 years. Janet is survived by her sons Darrel (Michelle), Danny (Elaine), David (Christina); grandchildren Elisabeth (Matt), Bret (Tiare), Matt (Katie), Jordan (Victoria), Jacqui, Kyle, Aidan and Lilah; sister Elsie Montgomery (Bob) and brothers Jack Leslie (Carolyn) and Tom Leslie (Phyllis). Janet was predeceased by her husband Lyle and parents Roy and Olive Leslie. Janet was born in Vulcan, Alberta and grew up on her parent’s farm in Mossleigh. She graduated High School from Vulcan and was married to Lyle on May 12, 1962. Their three sons were born in the first 4 years of the marriage. The young family moved to Algeria, where Lyle worked in the Sahara oilfields for two years, in the late 1960’s. It was there that Janet became a Christian and really began her life of service to the Lord. The family returned to Canada in 1970 and soon settled in High River where they built a home on 5th Street West where Janet lived and raised a family for 45 years. Janet was very involved as a parent with her sons’ participation in band, sports and church activities. She was always present as a fan, cheerleader, driver (of her boys and many of their teammates), and sometimes called in to duty as a coach. She spent many hours as a volunteer for the High River hockey and baseball associations and served on many committees including Mural Committee, High River Happy Trails, and the Culture Centre. For many years Janet also ran the concession stands at first the old High River rink and then the Bob Snodgrass Recreation Centre. She also worked at the Marigold Library system. Once all the boys had moved out from the family home, she opened up The Quill, an office supply and stationary store in High River, and ran that business for over 25 years. She was also an artist, specializing in pen and ink drawings of Alberta scenery, buildings, and sports art. She has her artwork hanging in thousands of homes around North America. It was these activities as a mother, active parent, volunteer, business owner, and artist that introduced her to so many people in the community. She will be fondly remembered, and missed, by many in High River and the surrounding area. As a family we would like to thank Dr. Sarah Makhdoom for your compassion and excellent care for Mom. Thank you to the staff at Seasons High River and to the 3rd floor nurses at the High River Hospital. In lieu of flowers or gifts, Memorial Donations can be made to the High River Baptist Church in Janet’s name. A Memorial Service was held on Saturday, February 8th at 2:00 p.m. at the High River Baptist Church, 514160 - 121 St. E., High River, AB. Caring for the family is Lyle Reeves Funerals of High River (Craig Snodgrass) 403.652.4242.

Mrs. Janet Nash of High River, Alberta went home to be with her Lord and Savior on January 17, 2020 at the age of 76 years. Janet is survived by her sons Darrel (Michelle), Danny (Elaine), David (Christina); grandchildren Elisabeth (Matt),... View Obituary & Service Information

The family of Mrs. Janet Rae Nash created this Life Tributes page to make it easy to share your memories.

Mrs. Janet Nash of High River, Alberta went home to be with her...