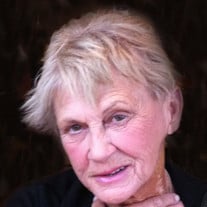 Jeannette Skoog aka ‘Peanut’ of the MD of Foothills, Alberta passed away at home suddenly on July 7, 2015 at the age of 69 years. Jeannette is survived by her daughters Liane, son-in law Dale, Shelly & Wendy, son-in-law Robert and grandchildren Clinton and Curtis, and friend that became like her daughter Teri, as well as her brother James Luco. She was predeceased by her mother Jean Luco, and father George Luco. Jeannette was born in Brighton England where her Mom and Dad brought her over on the Queen Mary as an infant to Pincher Creek Alberta. Peanut resided in many communities within in Alberta, and raising her family with Alvin in Kimberley BC until her daughters graduated. Peanut then made her move to Calgary where she resided with her daughter Liane and son-in law Dale for 20 years before moving to the country with them on their acreage in the MD of Foothills. Four years ago, she retired from Boardwalk Equities. Peanut’s love of the water, camping, going out for dinner, gatherings with friends and family, and her love of being on the acreage (i.e., watching the birds and the bunny’s which she called hoppers) will always be remembered. Also her incredible wisdom and love she gave freely to others will always be among all that were fortunate enough to be touched by her presence. Everyone that was lucky enough to have encountered a moment or more with Peanut know that even if you were a stranger you soon became a friend that she would remember. A tribute to Peanut, ‘the woman, the Mom, and the friend, Life Well Lived’, was held on Saturday, July 25th, 2015 at 1:00 p.m. on the acreage. All friends and family are welcome and can contact Teri at [email protected] Memorial Donations can be made to the Tom Baker Cancer Centre, 1331 – 29th Street NW, Calgary, Alberta T2N 4N2. www.albertacancer.ca/Tom-Baker-Cancer-Centre To send condolences and view Jeannette’s Tribute Page please visit, www.lylereeves.com . Caring for the family is Lyle Reeves Funerals of High River 403.652.4242.

Jeannette Skoog aka &#8216;Peanut&#8217; of the MD of Foothills, Alberta passed away at home suddenly on July 7, 2015 at the age of 69 years. Jeannette is survived by her daughters Liane, son-in law Dale, Shelly & Wendy, son-in-law Robert and... View Obituary & Service Information

The family of Jeannette Irene Skoog created this Life Tributes page to make it easy to share your memories.

Jeannette Skoog aka ‘Peanut’ of the MD of Foothills, Alberta...