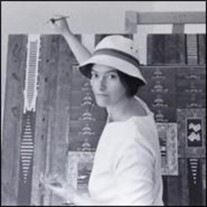 Jill Ann Livermore passed away at Peter Lougheed Hospital in Calgary, AB on Saturday, March 27, 2021, at the age of 72 following a long battle with COPD. Born on April 13, 1948 in North Battleford, SK, Jill developed a strong interest in drawing and painting early in life. She later attended Alberta College of Art and Design, graduating with an Honours Diploma in Fine Arts in 1970. Jill subsequently earned scholarships to pursue graduate work at the Emma Lake Artists Workshop in Saskatchewan, and the Instituto Allende in San Miguel, Mexico. Thereafter, she returned to Calgary where she became an artist-in-residence at the Dandelion Gallery, located at what is now the Deane House at Fort Calgary. In 1974, Jill moved to Montreal, where she expanded in her artistic repertoire to include multi-media and sculpture pieces using papier-mâché. While in Montreal, she was long associated with the Powerhouse Gallery. She returned to Calgary in the mid-1990s. Over the course of Jill’s five-decade career as a professional artist, she had several solo and group shows in Calgary, Edmonton, Montreal, Toronto, Washington D.C., and San Miguel. Her art is represented in the Canada Council Art Bank, the Alberta Visual Arts Foundation, and in private collections throughout Canada. Her artwork is readily identifiable by her signature initials, JAL. Jill was strong in spirit and determination in the pursuit of her craft. Also passionate about politics, the welfare of people, and the environment, she did not shy away from making her opinion known on issues of the day. Neither time, distance nor circumstance will let us forget our fond memories of Jill, our dear sister, aunt, fellow artist, and friend. Jill is survived by her siblings Michael (Heather) of Carrot River, SK, Heather (Ron) of Parksville, BC, and Ian (Bev) of Russell, ON as well as five nieces and five nephews. She is predeceased by her parents A. Betty (nee Dodds) and Dr. Richard G. H. Livermore, DVM, sister Susan and brother Kerry. Funeral and interment arrangements will be determined later. In lieu of flowers, those wishing to do so may donate to a charity of their choice in memory of Jill. Caring for the family is Lyle Reeves Funerals of High River (Craig Snodgrass) 403.652.4242.

Jill Ann Livermore passed away at Peter Lougheed Hospital in Calgary, AB on Saturday, March 27, 2021, at the age of 72 following a long battle with COPD. Born on April 13, 1948 in North Battleford, SK, Jill developed a strong interest in... View Obituary & Service Information

The family of Ms. Jill Ann Livermore created this Life Tributes page to make it easy to share your memories.

Jill Ann Livermore passed away at Peter Lougheed Hospital in...