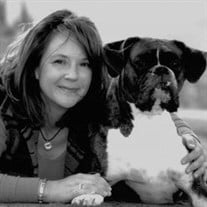 Joanne Maria Klauer passed away on Friday, February 8 at 5pm in her home in Calgary. She was in the company of an intimate group of family, friends and medical professionals. Joanne was born in Edmonton, Alberta on April 5, 1968. Her parents, Theodore and Lorna Klauer, raised her on their family farm near Wainwright, Alberta. Animals were always a big part of Joanne's life, especially horses. Her passion for riding lead her to leave home for the summers from the young age of 15 so she could live and work at a stable near Sherwood Park. Joanne trained and competed in hunter jumping. After high school she left home again, this time to go to the University of Alberta, after which she was off to the University of Saskatchewan for law school. Joanne moved to Calgary in 1994 to article with the Milner Fenerty law firm. In 1995 she left Milner Fenerty to begin a career as a municipal lawyer in Brownlee Fryett's Calgary office. Joanne excelled at municipal law and had found her calling and passion as a lawyer. After 18 years at Brownlee, Joanne moved her practice to MLT Aikins. Joanne had a reputation as a strong and loyal advocate for her clients and was recognised as one of the leading municipal lawyers in Alberta. She was affectionately known to her clients as "Slayer". But Joanne's true passion was her animals. Joanne always kept her home full of cats and dogs, many of whom were rescues. She was actively involved in every manner of dog competition as a trainer, competitor and judge. She was part of the Alberta Boxer Rescue Society and of the Canadian Kennel Club. Her awards and ribbons, including several national championships, are displayed throughout her home. In recent years her love of animals took her to Botswana for what became an annual pilgrimage on safari. Her photos, posted extensively on Facebook, are an amazing account of her many adventures, especially with the big cats of Africa. Joanne died as she lived; stoically, fearlessly and with her particular brand of attitude. Her irreverent humour was with her to the end. She chose to die in her own home, on her terms through the Medical Assistance In Dying program. A dignified end to a life well-lived. Joanne was predeceased by her father Theodore in September 1997. She leaves her mother, Lorna, as well as many aunts, uncles and cousins to mourn her. Joanne was adamant that there would be no funeral or 'celebration of life'. Rather, she suggested quietly raising a glass of your favourite drink to her memory. Rest In Peace (as if!) Joanne Maria Klauer. Lyle Reeves Funerals of High River (Craig Snodgrass) 403.652.4242.

Joanne Maria Klauer passed away on Friday, February 8 at 5pm in her home in Calgary. She was in the company of an intimate group of family, friends and medical professionals. Joanne was born in Edmonton, Alberta on April 5, 1968. Her parents,... View Obituary & Service Information

The family of Ms. Joanne Maria Klauer created this Life Tributes page to make it easy to share your memories.

Joanne Maria Klauer passed away on Friday, February 8 at 5pm...