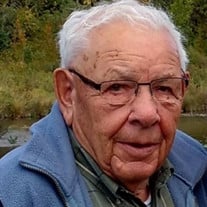 It is with deep sadness we announce the passing of John Loeffel, beloved husband, father, father-in-law, grandfather, brother-in–law, uncle and friend, who peacefully left us on Sept. 13th, 2021 with his loving wife of 59 years Frances at his side. He will be eternally loved and cherished by his wife Frances, daughters Darlene (Daryl) of Calgary, and Christina (Rob) of Creemore, ON, grandchildren Jacob of Vancouver and Erika of Toronto. Fondly remembered by in-laws John & Coramay Lewisch, Karl & Glenda Lewisch, Swiss nephews Peter, Claudio, Michael Waldburger and families, and Canadian nephews Ernest, Shawn and Greg Lewisch and their families, and extended family and friends. John was predeceased by his sister Kathy Waldburger and brother-in-law Mario of Switzerland. John was born in Ferenberg, Switzerland on February 16, 1929 to Anna and Fritz Loeffel. During his early life in Switzerland, he trained in the art of Swiss cheesemaking, and served in the Swiss Army as a Corporal where he became an elite sharp-shooter. He had an ear for languages, picking up the words of the regions he resided in Switzerland (German, French, Italian), even being mistaken for a Dane when he moved to Denmark to work in a cheese factory. From Denmark, his adventurous spirit jetted him to Canada. After moving around Western Canada, he landed for several years in Uranium City, Saskatchewan where he worked initially as a muck machine operator in the uranium mines, then later fire chief for the local fire department. In 1959, he moved to Edmonton, Alberta where he and a friend started a long distance trucking business, resulting in a multitude of hilarious stories. Two years later, he bought a farm in Opal, AB and a year later married Frances. The dream was to farm full-time, so he sold his share of the business, reducing his time on the highways and spending more time with his family and their farm. Darlene and Christina were born and raised on the property, Darlene growing up with tools in her hand helping her Dad, Christina with her mom getting her knuckles deep in the garden. John loved the farming life: the peace & quiet, the land, always with a dog at his side. Life was busy having a grain and cattle farm, with many late nights and early mornings working to nature’s timelines, but he would never stress about it. Whatever challenges came or obstacles that presented themselves, he would just smile and say ‘so it goes’. He retained his happy wanderer character, taking his family on many driving vacations around Canada and the US, as well as tours of his homeland of Switzerland, Frances’ homeland of Austria, and other European destinations. The next move was to Southern Alberta, where at 70 years of age he and Frances took on building out an acreage near Cayley. They spent over 2 decades enjoying the views of the Rocky Mountains, and the beautiful foothills. During those years John and Frances took their RV camping throughout North America, touring various locations in Europe, cruising to sunny destinations, and crossing off some of his bucket list locations including Berlin, a return trip to Denmark, and Russia. John’s quiet wit, easy going nature and calming presence was the backbone of the Loeffel family. Family came first, and both he and Frances built traditions for Darlene and Christina that they will forever cherish. Every Sunday there was always music playing loudly throughout the house. Dad loved to sing (always louder when ‘Don’t Fence Me In’ was playing) and dance (he earned the nickname Twinkle Toes in his friend group, as he and Frances could really cut up the rug!). He had many interests, and he always had something to accomplish. This led to a very full life, only slowing down in his last year when his health deteriorated. But he continued to be sharp of mind (and wit), and recalled precise details right up to his last days. John had many proverbs and inspirational poems he would recite that will continue to live on with his family. And he always had a story, whether a funny antidote from his adventures, or a special lesson to bestow. The girls will remember him saying goodnight during their childhood with stories of paradise “Schlaraffenland”, where fun and food were bountiful. He always ended the story with saying “Traeum suess von Sauerkraut und Schweinefuess” – with the girls always giggling and yelling “No, Schnitzel”. Schlaf gut, husband, father, friend. A Private Family Graveside service will be held at the Cayley Cemetery. In memory of John, those who wish may direct to Ronald McDonald House.

It is with deep sadness we announce the passing of John Loeffel, beloved husband, father, father-in-law, grandfather, brother-in&#8211;law, uncle and friend, who peacefully left us on Sept. 13th, 2021 with his loving wife of 59 years Frances... View Obituary & Service Information

The family of Mr. John Hansueli Loeffel created this Life Tributes page to make it easy to share your memories.

It is with deep sadness we announce the passing of John Loeffel,...