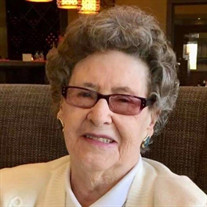 Mrs. Josephine Martin of High River, Alberta passed away at Season’s Retirement Community in High River on June 22, 2021 at the age of 92 years. Josephine is survived by her beloved partner and best friend, Vincent Treadgold, her sisters Julie Wilby (Phyllis Wood) and Patricia Brooks (George), her children Angela Litwin (Marvin), Ellen Francis (Ron Nadeau), Timothy Lovejoy (Debora), Yvonne Richards (Mark), her grandchildren Gordon Bohonus of Camrose AB, Amber Bohonus of Victoria BC, Natalie Manley of Carrying Place ON, Cher and Tyler Lovejoy of Calgary AB, many dearly loved great-grandchildren, and one great-great-grandson. Josephine is predeceased by her late husbands Gerald Lovejoy of Calgary AB and Leo Martin of Camrose AB, as well as her son Paul Lovejoy of Calgary AB, son in laws Al Bohonus of Calgary AB and Jim Francis of Brighton ON, her sister Margaret Weymouth-Wilson (AUS), brothers Ronald Wilby (UK) and Derek Wilby (UK), and sister-in-law Phyllis Wood (Strathroy, ON). Born in Weymouth, Dorset, Josephine met and married her first husband Gerald Lovejoy in 1948. Together with Gerald’s parents, they ran the family grocers “H.G. Lovejoy & Son” in Shaftesbury until emigrating to Canada in 1954. As a Military Wife, Josephine and the family moved frequently in the early years, being stationed at Val Cartier, QC, Sarnia, ON, Petawawa, ON, Zoest, Germany, and Calgary (Currie) AB. While stationed at Currie Base in Calgary, Jo began working at The Westgate Hotel. When the shareholders of The Westgate eyed a new property in Camrose for a new hotel, they asked Jo and soon to be husband Leo if they would move to Camrose and be a part of the building, opening, and running of The Norseman Hotel. So they, along with youngest daughter Yvonne, moved to Camrose in 1978. Some of Josephine’s best friends and happiest memories are from the time spent in Camrose and at The Norseman Inn. She enjoyed going to the Legion to play darts or watch the pool tournaments, going to BJ’s to play Bingo, sang in the Sweet Adeline’s choir, and was Worthy Grand Matron at the Camrose branch of The Eastern Star. After retiring from The Norseman, Jo decided she missed working with the public, so she went back to work at Smitty’s with Keith & Jerome and the Team. She greatly enjoyed serving the customers there and had many fond memories of crazy things like “false teeth” and sharing “nerds” with many of the serving staff and kitchen staff, which included her daughter Yvonne and Grandson Gord (Gordy-Guy). When Leo passed away in 2008 Josephine was saddened to leave Camrose, but High River proved to be one of the more exciting times of her life. Little did she know that Cupid was circling nearby, and she soon discovered the love of her life in Vincent Treadgold. She was smitten to be sure, and many times she would say “I don’t know what I ever did right to deserve him!” Anyone that met them knew right away that they were meant for each other, and they soon became the cutest, sweetest, most inspiring couple in the senior circuit. After a brief hospitalization, Jo began treatments for skin cancer, and in the long months that followed she looked to Vincent as her source of strength and perseverance. Vincent’s strength truly kept her going, and his love kept her happy to the very end of her long life. At Josephine’s request, a Private Family Celebration of her Life will be held at Highwood Golf Course on Saturday, June 26th, 2021. Memorial donations may be made in Josephine’s name to The Canadian Cancer Society; Skin Cancer Research. Caring for the family is Lyle Reeves Funerals of High River (Craig Snodgrass) 403.652.4242.

Mrs. Josephine Martin of High River, Alberta passed away at Season&#8217;s Retirement Community in High River on June 22, 2021 at the age of 92 years. Josephine is survived by her beloved partner and best friend, Vincent Treadgold, her sisters... View Obituary & Service Information

The family of Mrs. Josephine Yvonne Martin created this Life Tributes page to make it easy to share your memories.