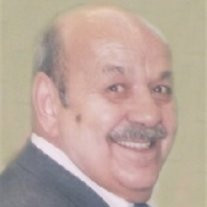 Joseph Roland Edward (Rolly) Caron born in Perron, Quebec on June 11, 1937 passed away peacefully on the morning of September 9th, 2013 at the Peter Lougheed Hospital in Calgary at the age of 76 after a brief battle with cancer. Over the years Rolly had a variety of jobs, some of which included working as a diamond driller in Haiti, a member of the Canadian Armed Forces - Lord Strathcona Regiment in Calgary, a blacksmith, farm/ranch hand/manager, bartender, school bus driver, cook at Whistlestop train, grounds maintenance for Foothills School Division, and flooring installer before retiring. Rolly enjoyed many hobbies over the years including hockey, boxing, swimming, dancing, horseback riding, fishing, camping, gardening and spending time with his family who will miss him very much. Rolly is survived by his sister Huguette, brothers Gaston and Jean-Claude; daughters Roxanne (Mark Johnson), Rita (Eugene Elke), son Scott (Rhonda), and their mother Anne (Ron Smyth); grandchildren Ryan (Erika), Curtis, Andrea (Chase Leavitt), Kim, Tiffany (Matthew Fairbrother), Alissa, Kenton, Morgan and Cole, great-grandchildren Brooklyn and Mason as well as numerous nieces and nephews. He is predeceased by his father Leo, his mother Onida (Hart), his sister Jacqueline (Saiza) and brothers Marcel, Roger, Raynald and Yvon. Rolly's family wishes to thank the many doctors and nurses at the Rockyview General and Peter Lougheed Hospitals as well as the staff and Dr. Wheeler at Sarcee Care West (Calgary), and Dr. Keith Spackman in High River, for the excellent care and compassion given to our Dad. A Celebration of Rolly’s Life was held at the on Monday, September 16th at 1:00 p.m. at the High River Christian Reformed Church located at 450 MacLeod Trail S.W. High River. In lieu of flowers donations may be made to Alberta Childrens Hospital in Rolly's name. To send condolences and view Rolly’s tribute page please visit www.lylereeves.com . Caring for the family is Lyle Reeves Funerals of High River (Craig Snodgrass) 403.652.4242.

Joseph Roland Edward (Rolly) Caron born in Perron, Quebec on June 11, 1937 passed away peacefully on the morning of September 9th, 2013 at the Peter Lougheed Hospital in Calgary at the age of 76 after a brief battle with cancer. Over the years... View Obituary & Service Information

The family of Mr. Joseph "Rolly" Caron created this Life Tributes page to make it easy to share your memories.