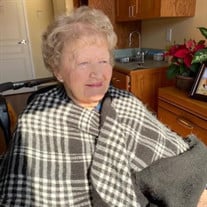 It is with heavy hearts that we announce the sudden passing of our wonderful mom, grandma, great-grandma and great-great-grandma, Julia Brown, on March 25, 2021 at the age of 87 years. Julia was the eldest daughter of R. Palmer Nelson and Alma Nelson of Queenstown and she grew up there with 3 brothers and 3 sisters. She attended school in Queenstown and Cluny, was relied on to help care for her younger siblings and she did a lot of the cooking for the family. She married James (Jim) Brown of Arrowwood in 1951 and they brought 4 children into the world. Julia was pre-deceased by her husband in 2012 and she is survived by her children, Dennis (Sharon) Brown, Norma Blake, Roy Brown (Raelynn) and Brian (Lori) Brown. She also leaves behind 12 grandchildren, 19 great grandchildren and 2 great-great grandchildren. Also surviving her are her siblings Chris (Deanna) Nelson and Joan Nelson, and her sisters-in-law Julie Nelson, Charlotte Nelson, Betsy Brown and Eleanor (Jack) Ward, as well as numerous nieces and nephews. Julia was mostly known as “Julie” or “Dulie” (a name given to her by her younger siblings - her siblings, nieces and nephews still call her Dulie). Julia was a homemaker, first and foremost, and took great pride in her family and her home. She was an expert cook, seamstress, gardener and chauffeur and she loved to crochet and knit. Her claim to fame was her beautiful buffalo wool sweaters that she knit for the whole family and her homemade bread, buns and cinnamon buns were second to none. She always had a huge garden on the farm and canned and froze enough vegetables and fruit to last the year. She hauled many a harvest meal out to the fields and quite often was driving the grain truck too. Julia moved many times during her life with her husband Jim and they experienced the farm life in a few areas including Queenstown, Beaverlodge, Arrowwood and Nanton but also branched out into the motel business in Canmore, Kamloops, Fort St. John and Creston. She wasn’t afraid of hard work or learning new things and she jumped right into the motel industry to learn the ropes. Their retirement home was in Nanton and the grandchildren became a huge part of her life – their house had a revolving door of grandchildren coming and going and often stopping after school for snacks before after school activities. Not sure who enjoyed these visits more – her or the grandkids! It wasn’t unusual for her to have half a dozen grandkids there at any given time! Their large house accommodated them well and there were many many sleepovers. Through the years Julia’s interests included anything her kids or grandkids were involved in including hockey, 4-H, curling, golf, figure skating, baseball and dance. She was her grandchildren’s biggest cheerleader! In later years she enjoyed collecting porcelain dolls and antiques, tending her flowers and regular trips to the casino. She was also a member of the U.C.W. in Nanton. Julia and Jim had treasured memories of trips taken, including a 25th Anniversary trip to Hawaii and a 45th Anniversary trip on a Caribbean Cruise, and they especially loved their travels south to Nevada and Arizona each winter. Julia’s last home was the Silver Willow Lodge in Nanton, where she lived for 7 ½ years. Unfortunately, dementia took her memory and a stroke took some of her mobility, but she always had a genuine smile for everyone and her kind-hearted and thoughtful personality never changed. She had her 87th birthday on March 22nd and thoroughly enjoyed the family members who gathered outside her window to sing happy birthday to her and wave and blow kisses. This picture of her was taken that day as she watched her family and the joy on her face is very evident! A precious memory we will all keep in our hearts! A special thank you is extended to the staff at the Silver Willow Lodge for the wonderful care Julia received during her stay there. She was always treated with compassion, she was content and the staff and residents became her second family. We thank you all from the bottom of our hearts. A private family service will be held at the Nanton Cemetery on Thursday, April 1st. If desired, memorial donations may be made to the Silver Willow Lodge, Box 40, Nanton, AB T0L 1R0, in memory of Julia. These donations will be designated for the 300 Unit at the Lodge. Caring for the family is Lyle Reeves Funerals of High River (Craig Snodgrass) 403.652.4242.

It is with heavy hearts that we announce the sudden passing of our wonderful mom, grandma, great-grandma and great-great-grandma, Julia Brown, on March 25, 2021 at the age of 87 years. Julia was the eldest daughter of R. Palmer Nelson and Alma... View Obituary & Service Information

The family of Mrs. Julia Marie Brown created this Life Tributes page to make it easy to share your memories.

It is with heavy hearts that we announce the sudden passing of...