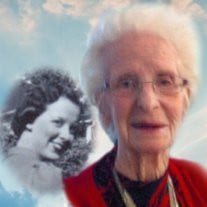 Mrs. June Malmberg passed away peacefully on June 3, 2013 at the Madison Manor in Nanton, Alberta at the age of 96 years. June was predeceased by her beloved husband Earle Malmberg in 1980 and their son Randy Malmberg in 2008. June is survived by her children Don (Lana) Malmberg, Barbie (Wayne) Green, Cindy Malmberg and daughter-in-law Fiona Malmberg. June will be lovingly remembered by 8 grandchildren, Shannon (Liv) Eymere, Kelly (Llana) Malmberg, Eugene (Shawna) Malmberg, Brad (Ramone Lasso) Malmberg, Chris (Lisa) Malmberg, Grant (Dawn) Green, Anje (Shawn) Miller, Cory (Karle) Green as well as 18 great grandchildren. She is survived by sisters-in-law Lucy and Marj Malmberg, many nieces and nephews and their families and one cousin Dona Edgar. June was born on the farm at Glenview, Alberta to parents Ferne & Don Baker and was raised there with her siblings Duane, Barbie and Betty. June married Earle Malmberg and they farmed and raised their family in the Herronton district. After Curley’s death in 1980, June lived in High River and Calgary before moving to Nanton in 2012. A life well lived and well loved, June had wonderful world travels and pursued many interests such as golfing, bowling and drawing. She was a lifetime member of the Daughters of The American Revolution. Her legacy is love of her family and her strong spirit of independence and determination. The family wish to thank the staff at the Madison Manor in Nanton for their care and compassion to June and her family over the last year. In lieu of flowers, memorial donations may be made to the Alberta Cancer Foundation c/o Tom Baker Centre (1331 – 29 St. NW, Calgary, AB, T2N 4N2) or the Madison Manor (Box 1180, Nanton, AB, T0L 1R0). A Celebration of June’s Life was held on Saturday, June 8 at 1:00 p.m. at the High River United Church. To send condolence’s and view June’s tribute page please visit www.lylereeves.com . Caring for the family is Lyle Reeves Funerals of High River (403.652.4242)

Mrs. June Malmberg passed away peacefully on June 3, 2013 at the Madison Manor in Nanton, Alberta at the age of 96 years. June was predeceased by her beloved husband Earle Malmberg in 1980 and their son Randy Malmberg in 2008. June is survived... View Obituary & Service Information

The family of Mrs. June Malmberg created this Life Tributes page to make it easy to share your memories.