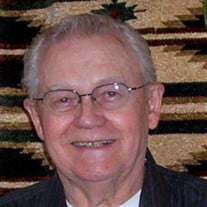 It is with heavy hearts that we announce the passing of our beloved Bruce who passed away peacefully at the Silver Willow Lodge in Nanton, AB on April 2, 2020 at the age of 90 years. Kenneth “Bruce” Young was born at Cochrane Alberta in 1930. He moved with his parents Bob and Marion Young to Stavely in 1939. and then to Nanton in 1948 where he has lived for most of his life. Bruce started his working career as a mechanic but he tried his hand at other things also. He spent one winter in London Ontario with the SS Kresge store. Back to Nanton as a mechanic for five years, then went truck driving for A Clark & Son hauling livestock and moving buildings. Bruce then went into business for himself in a small service station for six years. This was followed by road building for NL Smith for two years. The last twenty-five years of his working career were spent with Magwood motors where he started as a mechanic, moved to parts, then to machine sales, and back to parts manager until he retired. During all the years that Bruce lived in Nanton he volunteered many hours to several different organizations. He was a member of the Nanton Volunteer Fire department from 1948 until 1983, the last 12 years as Fire Chief. Along with others, he was greatly involved in developing the rural fire protection that the municipality has today. Bruce also worked with C.J. Caspel and others in starting an ambulance service for Nanton. Bruce designed and still has his original design papers of the present fire hall. Bruce married Helen Joan Bondy in 1953. They have three children: Daughter Becky married Gary Eichenauer and they have a son, Kelby. They now reside in Procter, BC. Daughter Pamela married Timothy Boyko. They have three children, sons Brandon and Jason, and daughter Kristie. They reside in Mabel Lake, BC. Son Kenneth still resides in Nanton. Throughout his life Bruce gathered many wonderful friends, and he will be dearly missed. Bruce is predeceased by his father Robert, mother Marion, and sister Jean. He is survived by his wife Helen, daughters Becky (Gary) and Pam (Tim), and son Ken, his grandchildren Brandon, Jason, Kristie, and Kelby, and his sisters Roberta, Alix and Jocelyn, and brother Bill. He is also survived by many nieces and nephews, and numerous friends. The family would like to thank the staff at Silver Willow lodge who have been amazing, grieving with us over the restrictions during these challenging times, and giving Bruce the best of care. A huge thank you to everyone for your kindhearted support. No services will be held. Caring for the family is Lyle Reeves Funerals of High River (Craig Snodgrass) 403.652.4242.

It is with heavy hearts that we announce the passing of our beloved Bruce who passed away peacefully at the Silver Willow Lodge in Nanton, AB on April 2, 2020 at the age of 90 years. Kenneth &#8220;Bruce&#8221; Young was born at Cochrane... View Obituary & Service Information

The family of Mr. K. Bruce Young created this Life Tributes page to make it easy to share your memories.

It is with heavy hearts that we announce the passing of our beloved...