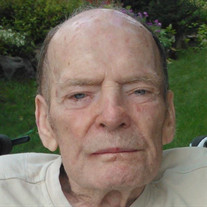 Ken Spence passed away at the Bethany Calgary Care Centre on November 4, 2014 at the age of 86 years. Ken is survived by son, Greg (Deborah), granddaughter Megan (Greg), and grandsons Richard, Steven, Andrew and Christopher (Kirk). Ken was predeceased by his wife Laura Berniece (nee: Chapman), son Kirk Allan Spence, father Louis Wyndam Spence, mother Muriel Elizabeth (nee: Smith), brother Robert Spence and sister Elizabeth (Betty) Gillespie. Ken was born in Regina, Saskatchewan. He attended Queens University and began his career with the YMCA in Regina. He married his beloved wife Berniece on September 4, 1954. Ken spent most of his career with the YMCA, relocating from Regina to Vancouver, where both of his sons were born. In 1963 he was named General Secretary for the Lethbridge YMCA and the building of the current Stafford Drive location was a highlight of his tenure. In 1973 Ken was appointed General Secretary for the Chilliwack YMCA , and in 1976 the family relocated to Edmonton when Ken became Regional Director for the YMCA in Alberta. He spent the last 10 years of his career as Senior Administrator for the Department of Sociology at the University of Alberta, retiring in 1991. Following Berniece’s passing in 2005, Ken relocated to Calgary. He was a passionate reader, and both Ken and Berniece enjoyed dancing as well traveling to locations including Scotland, Australia, the Caribbean and Alaska. One of their favourite pastimes was jumping in the car and seeing the sites locally in Canada. The family wishes to express its deepest gratitude to Bethany Calgary, where Ken resided since 2010, particularly social worker Shirley Smith and all of the staff on Levels 8 and 6 for their loving care of Ken and compassionate support during his end of life journey, Rolita Tang who was a bright spark in Ken’s life during her regular visits, and Pastor Anthony Heiraas of Peace Lutheran Church. In lieu of flowers, memorial donations may be made to the Bethany Care Society, 1001 17th St. NW, Calgary, AB, T2N 2E5, 1.888.410.4679, www.bethanyseniors.com. At Ken’s request no formal services will be held. To send condolences and view Ken’s Tribute Page please visit www.lylereeves.com. Caring for the family is Lyle Reeves Funerals of High River (Craig Snodgrass) 403.652.4242.

The family of Mr. Kenneth Wayne Spence created this Life Tributes page to make it easy to share your memories.

Ken Spence passed away at the Bethany Calgary Care Centre on...