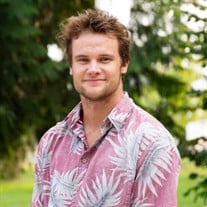 Mr. Kyle Nash of High River, AB went home to be with his Lord and Saviour on December 15, 2020 after a tragic snowboarding accident at the age of 22 years. Kyle is survived by his parents, Daniel and Elaine Nash; brothers Matt Nash (Katie) and Jordan Nash (Victoria); grandmother Mary Thiessen; aunts and uncles Lorraine Toews (Eldon), Allen Thiessen (Tamra), Darryle Thiessen (Shelley Woods), Darrel Nash (Michelle), David Nash (Christina); and cousins John Toews (Sarah May), Katherina Toews, Josh Thiessen (Hailey), Zachary Thiessen, Jayden Thiessen, Elisabeth Hogan (Matt), Bret Nash (Tiare), Jacqui Nash, Aidan Nash, and Lilah Nash. He is predeceased by his grandfathers Aron Thiessen and Lyle Nash; and grandmother Janet Nash. Kyle was born in Calgary, AB on November 26, 1998. He grew up in High River where he was surrounded by family and friends. He graduated from Brant Christian School 2016. He finished high school early so that he could spend more time with YWAM missions in Tijuana, Mexico building homes for those in need. In the fall of 2019 he decided to go to Millar Bible School at the Sunnybrae campus in BC, where he deepened his relationship with his Lord and Saviour. Kyle had a zest for life and for people. He loved spending time with his family and friends playing card games, ping pong, hockey, and snowboarding. He also loved working with his framing crew in the summertimes. He had a real heart for giving; whether it be money, time, or acts of service. Many people were blessed by Kyle, not only for what he gave, but for the smiles and laughter that came along with the gifts! Kyle lived out one of his favourite verses that he eventually got tattooed; “Be kind to one another, tender hearted, forgiving one another, as God in Christ forgave you.” Ephesians 4:32. Memorial Donations can be made to the Sunnybrae Millar Bible School. 2 services for Kyle will be Live Streamed on Thursday, December 31st at 3:00 p.m. and 6:00 p.m. - The service bulletin for both services can be found by clicking on the Photos & Videos tab above. The Memorial Worship Service at 6:00 p.m.: https://www.youtube.com/watch?v=4-RJBYIDCQ8&feature=youtu.be&ab_channel=HighRiverBaptistChurch We would like to thank our community and High River Baptist Church for all their love and prayers during this difficult time. Caring for the family is Lyle Reeves Funerals of High River (403.652.4242).

Mr. Kyle Nash of High River, AB went home to be with his Lord and Saviour on December 15, 2020 after a tragic snowboarding accident at the age of 22 years. Kyle is survived by his parents, Daniel and Elaine Nash; brothers Matt Nash (Katie) and... View Obituary & Service Information

The family of Mr. Kyle Nathaniel Evan Nash created this Life Tributes page to make it easy to share your memories.

Mr. Kyle Nash of High River, AB went home to be with his Lord...