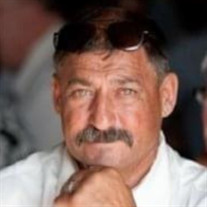 Mr. Larry Beutler of High River, Alberta passed away at the High River Hospital on September 7, 2021 at the age of 72 years. Larry is survived by his loving wife Judy, son Jody Beutler (Lindsey), Olivia, Kallen; son Jason Beutler (Nicole), Lucas, Slade; son Kyle Beutler (Gena-Lea), Kashtan, Avyelle; daughter Taryn Uzelac, Shantay, Luka, Emma; daughter Leah Lee (Ryan), Jesse-Rae (Devon), Justin, Coby, and first great grandson, Milo; daughter Crystal Leask, Rylee, Nash, Nilan; son Travis Banga (Tracey). He is also survived by his brothers, Richard Beutler (Sharon) and Donald Beutler (Diane) as well as sisters Evelyn Istace, Karen Holloway (Bruce), Sharon Kerley (Walter), Joyce Klemmer (Bill) and numerous nieces and nephews. Larry was predeceased by his parents Martha and Rudy Beutler as well as his first wife, Sylvia Beutler and son, Devin Beutler. Larry was born in Wapella, Saskatchewan on August 13, 1949, where he lived and worked on a neighbours farm until his move to Alberta with his family and where he resided the rest of his life. Throughout Larry’s life, he thoroughly loved coaching hockey, being a scout leader, umpiring our slow pitch games, attending all of his grandkids numerous sports games, travelling thousands of miles to watch Travis play hockey all over Canada and the United States all the while working 25 plus years as the manager of Highwood Distillers. But Larry found his true joy after the distillery when he began working for Gerry’s Transport as a pilot car driver. Not only did Larry love this work, but he found true friendship with his boss, Gerry. Sadly, Larry was forced into early retirement due to a workplace accident in 2016 that took his right leg. He courageously survived this accident and showed all of us just how tough of a guy he really was…and he kept that strength for the following five years. In the years following his early retirement, you could also find Larry down at the TAC shop for morning and afternoon coffee, camping with his family and friends, being First Mate on the boat, and building 3-D wooden puzzles. He found great joy in the busy lives of all his kids and grandkids and partaking in whatever they were up too, and we all loved having him there with us and it will never be the same without him… Larry, we loved you so and we will all meet you again with our campers at the beach…. In lieu of flowers, a donation in Larry’s honor would be preferred to the High River Community Cancer Center. A Come-and Go Celebration of Larry’s Life will be held at the High River Heritage Inn (Spitzee Post) on Saturday, October 2, 2021 from 12 to 4 p.m. Caring for the family is Lyle Reeves Funerals of High River (Craig Snodgrass) 403.652.4242.

The family of Mr. Larry James Beutler created this Life Tributes page to make it easy to share your memories.

Mr. Larry Beutler of High River, Alberta passed away at the High...