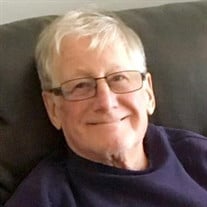 It is with very heavy hearts that the family of Larry Gene Bureyko announce his passing at home after a courageous battle with cancer. He was 79 years of age. He is survived by the love of his life and soulmate, Connie, his daughter Erin (Nick), sons Robin (Sherri), Ryan (Justin), and his pride and joy – his grandson, Rowan. Dad is also survived by his siblings Lorna (Robin) Holbrook, Brian (Susan) Bureyko, Cheri (Rob) Kruse, the Dorval family: Denis (Karen), Anne Louise (Jim), Helen (Rick), Betsy (Chuck), Sue (Steve), Michael (Lila) and Loretta (Robb), many nieces and nephews, and his best friend, Leo Mulvee. Larry was born February 8, 1943 in Gilbert Plains, Manitoba. Soon after that, the family moved to Thunder Bay, where Dad lived until February 2020. Dad was predeceased by his parents Andrew and Grace (Hannah) Bureyko, parents-in-law Jacob and Denise Dorval, sister-in-law Madeleine Robb, brother-in-law Raymond Dorval, great nephew Stephen Daniel, and numerous aunts and uncles. To know Larry is to bring up the legend that was Larry's Lounge. The lounge, run by both Larry and Connie, quickly became a huge part of our extended family. As a group (both staff and patrons alike), we shared many joyful moments, celebrating our communal gratitude. Larry and Connie were family to so many regulars. It is also how he met his best friend, Leo Mulvee. Larry was a successful entrepreneur over the years. But his passion for fishing and the outdoors eventually brought him to Larry’s Bait and Tackle in 2001. It was not just a job or a business to him, it was a labour of love where he enjoyed every minute spent there. This endeavour best showcased his pure and unadulterated love for life. His bait business also allowed him to pursue his love for fishing and the outdoors, providing him with unbelievable adventures and the accompanying stories that he shared with everyone including the big one that got away. Honesty, integrity, hard work, and building meaningful and genuine relationships were certainly important factors of his success. Dad loved people, and left an impression on all he met through the years from all around Canada and the United States. He worked hard – too hard, some would say – until the age of 77, when he somewhat reluctantly retired to Calgary to be near his children and grandson. Dad was fiercely protective and proud of his family. He adored Mom to bits, and never missed an opportunity to let anyone know how lucky he was to have had her put up with him for 55 years. They lived together, worked together, and dreamed together with great love and respect for one another. He loved his children more than words, and reveled in their accomplishments and successes. Dad became a surrogate father to those who didn’t have one in both Thunder Bay and Toronto, and was a foster grandpa to many in Calgary. He cherished and celebrated each one independently. His only grandchild, Rowan, was the apple of his eye. The move to Calgary allowed him to watch Rowan play hockey and grow into a young adult. Dad took immense joy in attending as many games as his health would allow, having great conversations with Rowan about school, sports, focus, and working hard in everything he does. Grandpa was a role model for Rowan, passing on fantastic advice, life lessons and secrets to success. The family would like to send our thanks to the amazing people who work at the Tom Baker Cancer Clinic. Larry was so thankful for your care. How lucky dad was to have met each and every one of you. From the nurses who were always happy to hear about Thunder Bay and Connie, the pharmacist who knew family in Two Hills, and last but not least, Patricia, Dad’s palliative nurse whom he created a special and sweet bond within their short time of knowing each other. No one can prepare you for the loss of a loved one, however Patricia’s gentle guidance and genuine care for Larry allowed us so much quality time in his last days. We also send thanks to all of those who reached out to dad and our family over the past few months during his decline, and to those who have offered prayers, condolences and support during this difficult time. Dad’s last wish was to return to Thunder Bay to fish at his and Leo’s secret fishing hole, and to sit by the shore of Lake Superior at his brother Brian’s and enjoy a bonfire and beer. His ashes will be brought to Thunder Bay this summer, where we will celebrate his life. An official notice will be widely announced before commencement. To say he will be missed is an understatement. He was our rock, our go-to, a man full of hope and positivity. He was fun loving with a generous heart of gold. In short, he was selfless. He touched so many lives. Larry was one-of-a-kind. We love you Larry, and will cherish every single memory for the rest of our lives. We were blessed to have had you as a husband, father, grandfather, brother, uncle and friend. Donations on behalf of Larry can be made to: TBRHSF – Northern Cancer Fund www.healthsciencesfoundation.ca/cancer-donate or to the Tom Baker Cancer Centre www.albertacancer.ca/donate. Caring for the family is Lyle Reeves Funerals of High River (Craig Snodgrass) 403.652.4242.

It is with very heavy hearts that the family of Larry Gene Bureyko announce his passing at home after a courageous battle with cancer. He was 79 years of age. He is survived by the love of his life and soulmate, Connie, his daughter Erin (Nick),... View Obituary & Service Information

The family of Mr. Larry Gene Bureyko created this Life Tributes page to make it easy to share your memories.

It is with very heavy hearts that the family of Larry Gene Bureyko...