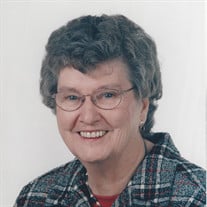 Mrs. Laura I. Stevens of High River, Alberta passed away at the Rockyview Hospital in Calgary on August 18th, 2018 at the age of 92 years. Laura was born in Barons, Alberta on April 26, 1926 and went to Circle School for 6 years and then to Barrhill School. She married Elmer Rozander of Carmangay on December 20th, 1944 and they farmed west of Champion on a large farm where it was necessary to have hired help year-round. She was kept busy making meals and caring for her family, gardening and sometimes even driving the tractor or combine. When Elmer passed away in 1965 she was left with 4 boys, so she moved to Carseland where they had a farm, but after 2 years she sold it and moved to Calgary. In 1970 Laura married Leonard Stevens and started buying and selling apartment buildings, so she was kept busy painting and fixing. In 1981 Laura and Len moved to High River and built a couple houses there. Laura accepted Jesus Christ as her savior in 1946 and became involved in churches. In High River she was involved with the Full Gospel Church enjoying her time there being on the lunch committee until the new church was built. She also hosted bible studies in her home both in Calgary and High River. Laura moved from her house into a condo in 2002 then moving into Medicine Tree Manor in March 2008. After several moves following the flood of 2013, she finally felt at home when she moved back into the manor in 2017. Laura enjoyed travelling with her first big trip to the Holy Land in 1979. She also did a tour called Walking in The Footsteps of Paul” which included Greece, Italy, Corinth and Turkey. She also went to Australia, New Zealand and many more. Laura leaves behind four sons, Ken Rozander, Don (Kathy) Rozander, Doug (Geri) Rozander and Jonathan (Melinda) Rozander; daughter-in-law Diane Wilson; step children Linda (Marvin) Frey and Dave Stevens; 9 grandchildren and 10 great-grandchildren as well as her brother Maurice (Freda) Wendelboe. Laura was predeceased by her three sisters Ruth Isaac, Josephine Grigor and Vivian Theilman; parents Ross and Agnes Wendelboe and her great-granddaughter Ryan Anne Rozander. A Funeral Service will be held on Wednesday, August 29th at 10:00 a.m. at the High River Full Gospel Church (1802 – 9th Ave SE, High River). Interment will follow at Archmount Cemetery in Lethbridge, Alberta. If desired memorial donations may be made to the High River Full Gospel Church (1802 – 9th Ave. SE, High River, AB, T1V 2A6) or the Gideons International Canada (www.gideons.ca). To send condolences and view Laura’s Tribute Page please visit www.lylereeves.com . Caring for the family is Lyle Reeves Funerals of High River (Craig Snodgrass) 403.652.4242.

Mrs. Laura I. Stevens of High River, Alberta passed away at the Rockyview Hospital in Calgary on August 18th, 2018 at the age of 92 years. Laura was born in Barons, Alberta on April 26, 1926 and went to Circle School for 6 years and then to... View Obituary & Service Information

The family of Mrs. Laura Irene Stevens - Rozander created this Life Tributes page to make it easy to share your memories.

Mrs. Laura I. Stevens of High River, Alberta passed away at the...