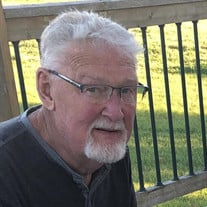 Len loved to be outside. As a young adult he worked for Brewster’s in Banff and guided horseback trail rides from the Banff Springs Hotel. His time in the saddle was short though when he married the love of his life, Leanne, and they began a lifetime of camping adventures starting with a humble tent trailer and culminating with the 28’ fifth wheel trailer that they camped in as recently as the summer of 2021. They camped anywhere and everywhere, for the most part staying in and around Southern Alberta. He was particularly fond of mountain camping and in the last few years grew more and more fond of Sandy McNabb just west of Turner Valley. After more than 40 years of battling heart disease, Len passed away quietly on the morning of March 27, 2022, with Leanne and his two boys by his side. Len was born on the kitchen table in their Elbow Park home on November 8, 1940 to loving parents James and Phyllis. Len’s first son, Trevor was born in 1968 when Len began working for his father-in-law, Lee Cook. He was a law-abiding man and performed long-haul safety inspections for Thompson/Olsen & Sherban Insurance company, the corporation that employed Lee. He later struck out on his own performing the same role, independently, then known as The Shadow. Len’s second son, Travis was born in 1972 and so began a long life of jobs ranging from farm- hand to automotive service writer. Len was a loyal and dedicated worker whether as an employee or a small business owner. Two careers that exemplify these traits the most were the Waterbed Hut in the mid-80’s and most recently SunMountain Energy. Len started Waterbed Hut with his best friend, Gary Ragan, and saw great success and growth for a number of years. Most prominent though, was Len’s final small business adventure, SunMountain Energy, a rural recycling pick-up service that Len started and passionately operated for 10 years. His passion and dedication to this small business proved to everyone his commitment to helping reduce our carbon footprint on the planet. When the physical requirements of recycling pick-up became just too much, Len reluctantly (he really did enjoy recycling, a lot!) moved into retirement. He and Leanne found themselves able to camp more often, whenever they wanted. And they loved it! Due to its incredible growth, Len chose to visit Calgary less as time went on. However, he was very proud of his Calgary heritage; heritage that runs deep into Calgary’s beginnings. Len was a direct descendant of the Riley family. The Riley’s emigrated from England in 1863 and settled on a 146,000 hectare parcel of land (now Hillhurst/North Hill/Sunnyside/Hounsfield Heights) between 1888 and 1909 (note: Calgary was only incorporated as a town 1884!) The Riley family made and left their mark on the city; Thomas Riley Building on the SAIT campus (Len’s Great Uncle), Louise Riley Library (Len’s 2nd Cousin) and Riley Park (donated to The City of Calgary by Len’s Great Uncle Ezra) just to name a few. Len will be remembered as a kind, loving and caring man with the heart of a giant. Len was predeceased by his parents James Lennox and Mildred Phyllis, and his sister, Antoinette. Len is survived by his loving wife Leanne, admiring sons Trevor (Johanna) and Travis (Sarah), mother-in-law Aileen Sells, sister-in-law Jonelle Johnson (Larry) and adoring grandchildren Tycen and Eryka. A Celebration of Len’s Life will be held on July 16, 2022 from 1:00 pm to 4:00 pm. The Celebration will be held at the home of Travis and Sarah. Eulogy and storytelling at 1:30 pm. Food, drinks and celebrating to follow. Travis and Sarah are located at 224037 Highway 546, exactly 4 km west of the 4-way stop in Turner Valley (see windflowerbandb.ca for more detailed directions). Please drive down the gravel driveway and park in front of Travis’s shop. Caring for the family is Lyle Reeves Funerals of High River (Craig Snodgrass) 403.652.4242.

Len loved to be outside. As a young adult he worked for Brewster&#8217;s in Banff and guided horseback trail rides from the Banff Springs Hotel. His time in the saddle was short though when he married the love of his life, Leanne, and they began... View Obituary & Service Information

The family of Mr. Lennox "Len" Russell Allan created this Life Tributes page to make it easy to share your memories.

Len loved to be outside. As a young adult he worked for Brewster’s...