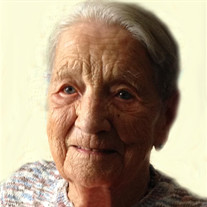 Mrs. Leola Paulson of High River, Alberta, formerly of Nipawin, Saskatchewan passed away at The Abbeyfield House in High River on November 11, 2014 at the age 95 years. Leola is survived by her daughter Joan (Ken) Tatlow; son Arland (Joyce) Paulson; grandchildren Debbie Kendhammer, Cathy Tatlow, Gary Tatlow, Kevin (Darcy) Tatlow, Brent (Nilda) Paulson, Richard (Petra) Paulson and Jo-ann (Ian) Campbell; great-grandchildren Krista Kendhammer, Kelsey Kendhammer, Kyle (Angeline) Tatlow, Gary Jr. (Jaclyn) Tatlow, Jordan Tatlow, Megan Tatlow, Rachel Paulson, Adam Paulson, Callum Campbell, Mackenzie Campbell, Kitso Paulson and Matthias Paulson; great-great-grandchildren Teagan Tatlow and Brody Tatlow. Leola is also survived by her brother Arthur (Iona) Stark; sister-in-law Midge Stark and other close family members. Leola was predeceased by her parents Roy and Amanda; husband Dave; brothers Orlando, Lellewyn, Vance, Lorne and Bill as well as her sister Ramona. Leola was born in Frontier, Saskatchewan on October 5, 1919 and relocated to the White Fox area in 1932 with her 6 brothers, 1 sister and Mom and Dad. She met and then married Dave Paulson on June 24, 1938 in Nipawin. They lived in Love, Saskatchewan until they relocated to Nipawin in 1988. Dave passed away in 2003 after they had been married for 65 years. Leola moved to Cedar Manor a senior’s residence in Nipawin where she resided until June 2014 when she relocated to Abbeyfield House in High River, Alberta to be closer to family. In her early years Leola was an avid curler and still followed competitions on TV. She enjoyed shuffleboard competitions as well. She will be remembered as a warm, kind Mother and Grandmother who never complained. The depths of sorrow we cannot tell Of the loss of one we loved so well; And while she sleeps a peaceful sleep, Her memory we shall always keep The Family A private family graveside service will be held at the White Fox Cemetery in Saskatchewan. Caring for the family in High River is Lyle Reeves Funerals www.lylereeves.com (403.652.4242); caring for the family in Nipawin is Coventry Funeral Services www.coventryfuneralservices.ca (306.862.4233).

The family of Mrs. Leola Rachel Paulson created this Life Tributes page to make it easy to share your memories.