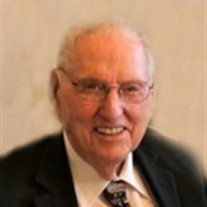 Beloved father and pillar of his community, Leonard Kane Haney passed away quietly at the age of 98 years in High River, Alberta. He was born near Iron Springs to a pioneer family in 1915. His father and both grandfathers homesteaded in the area and Leonard followed their example by taking up farming, after studying agriculture at Olds College in 1937. Haney Farms in Picture Butte, under Leonard's steady leadership, became one of the largest seed farms of its kind in Canada. Leonard was a national leader in pedigreed seed development. He and Velva Noble, a teacher, married in 1946 forming a formidable team as they raised their family of four children. They spent many evenings together with their kids, playing old time music- mother at the piano and father on the fiddle. Leonard ordered his first violin from the Eaton's catalogue in 1934, and over the years built a substantial collection of instruments, often lending fiddles to local children to "get them started." Leonard was active in community life in both Picture Butte and Lethbridge throughout his lifetime. He was a member of the Picture Butte United Church, and past president of both the Picture Butte Lion's Club and the Kiwanis Club of Lethbridge. He served as a trustee of the Lethbridge School Division for several years and was a member of the Lethbridge County Council. He served on the boards of the Oldman River Regional Planning Commission and Lethbridge Junior College. He was instrumental in the College's transition to the University of Lethbridge and served on both its Senate and Board of Governors. Leonard also served as a member of the Alberta Commission on Educational Planning (Worth Commission) representing public school trustees; the Provincial Post-Secondary Board of Education; the Provincial Agricultural Education and the Rural Extension Advisory Committee. He was a member of the Advisory Board on Weather Modification for Alberta and a member of the Farm Debt Review Board for Alberta. In 1974, Leonard was elected to the board of the Canadian Seed Growers Association and in 1981 became its national president. He also served as president of the SeCan Organization dedicated to seed distribution and promotion and played a critical role in the improvement and development of pedigreed grain seed nationally. Leonard also earned many accolades throughout his life time: The Robertson Associate Award of the Canadian Seed Growers Association (1969); life time membership of the Alberta School Trustees Association (1970); the distinguished service award of the Council on School Administration of the Alberta Teachers Association (1971); inducted into the Olds College Hall of Fame (1974) and the Harry Kane & J. F. Murray Award for community service to Picture Butte (1986). He especially valued this award because it was presented by his friends and neighbours in his community; the people who knew him best. In 1986 he was awarded the Order of Excellence by the Province of Alberta for his contribution to the betterment of Education in Alberta and his outstanding service to the pedigreed seed industry in Canada. In 1993 he was named a member of the Order of Canada and in 2005 he was granted an honorary doctorate of laws by the University of Lethbridge. Leonard was predeceased by his wife Velva; sisters Vera, Ruth, Francis and Alice, and is survived by his brother Howard (Georgia); sister Kathleen Peta; sons Harry (Maureen); Tom (Marsha Erb); Dick (Joyce) and daughter Barbara (Randy Jones). He is also survived by ten grandchildren; Shannon Haney (John Lanaris); Patrick (Sandy) Haney; Ryan (Victoria) Haney; David (Lisa) Haney; Lauren Haney (Squire Ball); Shaun (Tricia) Haney; Kevin Haney; Kerri Lynn (Brad) Vanderberg, Tasha Zboya (Johnathan Keith) and Jordan Zboya; and two step-grandchildren; Ben (Katrina) Jones and Levi (Erin) Jones; ten great grandchildren and five step great-grandchildren. The Haney family wishes to acknowledge the many kindnesses and excellent care provided to Leonard on the 2nd Floor of the High River Hospital Long Term Care Unit over the past two years. A memorial service is planned for Saturday, February 8th at 11:00 a.m. at McKillop United Church in Lethbridge. In lieu of flowers, donations may be made to the High River Hospital Foundation, 560 9th Avenue S.W., High River, Alberta. T1V1B3

Beloved father and pillar of his community, Leonard Kane Haney passed away quietly at the age of 98 years in High River, Alberta. He was born near Iron Springs to a pioneer family in 1915. His father and both grandfathers homesteaded in the... View Obituary & Service Information

The family of Mr. Leonard Kane Haney created this Life Tributes page to make it easy to share your memories.

Beloved father and pillar of his community, Leonard Kane Haney...