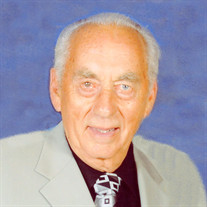 Mr. Leslie Earnest Gordon (Les) of Cayley, Alberta passed away, surrounded by loved ones, on January 1, 2020 at the High River Hospital at the age 91 years. He is survived by his wife Doris Gordon; Children, Barbara Gordon, Kathy Lyster (Mel), Joan Fiddler, Michael Gordon (Susanne), Wyann Gordon, Glenn Gordon (Donna); Grandchildren; Carmen Gordon, Tyler Lyster (Vicki), Trevor Lyster, Kayley Leeds (Shayne), Cole Fiddler, Shaness Fiddler, Jessie Kiss (Vince), Joseph Fiddler, Jeremy Gordon, Jonas Gordon, Ryan Beatson, Thea Beatson, Stephanie Helfrich (Cam), Hayley Gordon and Kyle Gordon. Les is also survived by 19 Great-Grandchildren and numerous Nieces and Nephews. Les was born in Vulcan, Alberta and grew up in and around the High River area. After graduating from the High River High School, Les attended Mount Royal College in Calgary where he was an enthusiastic member of the Boxing Club and proudly took those skills with him throughout his life. After college Les accepted a position with Calgary Power where he worked his entire career retiring in 1987 at the age of 58. For many years, Les was an active member of the Lions and Elks Clubs and the Masonic Lodge. Les was a devoted father and grandfather, was an avid out door enthusiast who enjoyed hunting, fishing and prided himself in his many accomplishments. Les had a fantastic sense of humor, was a boundless story teller and would often entertain his family and friends, young and old with his many humorous and larger-than-life stories of his past. Les was predeceased by his Mother and Father Thea and George Gordon, First Wife Dorothy Gordon, Sister Mable Green, Brother Stanley Gordon and son-in -law Jim Fiddler. Les’ family would like to thank the nursing staff of Unit 78 at South Health Campus as well as the nurses on the 3rd floor of the High River Hospital. A special thank you to all of the staff at the Silver Willow Lodge in Nanton. In lieu of flowers, donations can be made to the Salvation Army Food Bank, 119 Centre Street S.E., High River, Alberta, T1V 1R7. A Memorial Service was held on Wednesday, January 8th, 2019 at 1:00 p.m. at the High River Full Gospel Church, 1802 - 9th Avenue SE, High River, AB. Caring for the family is Lyle Reeves Funerals of High River (Craig Snodgrass) 403.652.4242.

Mr. Leslie Earnest Gordon (Les) of Cayley, Alberta passed away, surrounded by loved ones, on January 1, 2020 at the High River Hospital at the age 91 years. He is survived by his wife Doris Gordon; Children, Barbara Gordon, Kathy Lyster (Mel),... View Obituary & Service Information

The family of Mr. Leslie Earnest Gordon created this Life Tributes page to make it easy to share your memories.