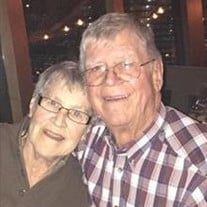 Lorraine Bagyinka of Blackie, Alberta passed away on October 8, 2018 at the High River Hospital at the age of 81 years. Lorraine is survived by her husband of 54 years, Ed; daughters Jennifer (Curry) and Jodi (Jason); son, Jason (Stephanie); grandchildren Kelson, Delanie, Michael, Lucas, Parker and Annalise, sisters Lorna (Al) and Patsy; brothers Howard (Gloria), Barry (Jenny) and Brian (Dane); as well as numerous nieces and nephews, and was predeceased by her Mother Jessie, Father Carl, sister Genevieve and brothers David and Hugh. Lorraine was born in Wadena, Saskatchewan and grew up on the beloved family farm with her mother and father and 8 siblings. There was always a lot of love and laughter at the farm. She later attended the Saskatoon Technical Institute where she received a diploma in bookkeeping, after which she spent many years working for the Federated Co-op in both Saskatoon and Edmonton. While in Edmonton, she met the great love of her life, Ed. They were married in 1964 and adopted their baby girl, Jennifer, in 1970 and baby boy, Jason in 1972. They later had baby girl Jodi in 1976. Ed and Lorraine moved to Blackie in 1970 when Ed got his first teaching job at Blackie School. Lorraine and Ed resided in the house they built in 1972 right up until her passing, and enjoyed endless hours working on the yard and in the garden. There was never a shortage of apple pies, ginger snaps, garden-grown vegetables or amazing meals when Lorraine was in the kitchen. Lorraine and Ed were inseparable all the way through their many years together, and set a wonderful example of how to be a loving, caring, exemplary couple to their three children. Above all, and most importantly, it's worth noting that Lorraine was a tireless, selfless, loving and generous mother to her three children, and always put them first. She never missed attending a school event or volunteering to go on many field trips. It was obvious to anyone that knew her that she loved being a Mother (and Grandmother) more than anything else. This endearing love of babies and kids carried through to her 6 grandchildren, who were her greatest joy. As Ed would say “there ought to be a hall of fame for moms, and she would be accepted on the first ballot”. A Private Family memorial will be held in the summer of 2019 as Lorraine wished to not have a traditional funeral. Details will be shared at a later date. In lieu of flowers memorial donations may be made to the High River Hospital Foundation 3rd Floor Care (560 9th Ave SW, High River, Ab, T1V 1B3). To send condolences and view Lorraine’s Tribute Page please visit www.lylereeves.com . Caring for the family is Lyle Reeves Funerals of High River (Craig Snodgrass) 403.652.4242.

Lorraine Bagyinka of Blackie, Alberta passed away on October 8, 2018 at the High River Hospital at the age of 81 years. Lorraine is survived by her husband of 54 years, Ed; daughters Jennifer (Curry) and Jodi (Jason); son, Jason (Stephanie);... View Obituary & Service Information

The family of Mrs. Lorraine Lily Bagyinka created this Life Tributes page to make it easy to share your memories.

Lorraine Bagyinka of Blackie, Alberta passed away on October...