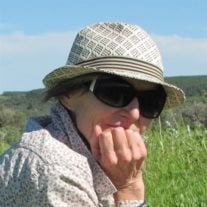 Linda Loree left this life as she lived it: surrounded by the love of friends and family. Born in High River, AB, Linda grew up on her family’s Midway Ranch north of Nanton. A childhood spent outdoors fostered her lifelong love of nature, animals, athletics, and adventure. She spent as much time on a horse as she did on foot. Indeed, when she began school she was certain that she was a horse. From an early age she experienced the magic in the hills. Summers were spent working alongside her grandmother, Edith Ings, to run the dude ranch at Trail’s End, a place that was always dear to her heart. Linda attended school in Nanton where she developed lasting friendships. She continued her education at Mount Royal College and earned an Honours Degree in English from the university in Nelson, BC. An avid reader and a skillful writer, one of her best qualities was her propensity for open-minded exploration of new thoughts and ideas. Always adventurous and seeking new experiences, her many travels included hitchhiking to Mexico at seventeen and travelling extensively throughout Europe and Morocco during the 1970s. While in Europe she lived in Switzerland, skiing and cleaning fondue pots. It was there that she met her future husband Michael Hornburg. Linda raised her children, Rachel and Nathan, in Calgary. She was a loving, imaginative, energetic mother with the ability to make the ordinary special. As one of the founding parents of the Calgary Waldorf School, Linda created a close-knit community of friends that embraced her philosophy of celebrating the whole child—mind, body, and spirit. She devoted herself to her children and was an attentive Granny to her grandchildren, William and Avery. They will remember her for the fun and full sense of love she brought to their lives. Just as she encouraged high standards in her children, she was on a life-long journey towards bettering herself. Linda was a natural athlete with a particular passion for running and yoga. Nothing slowed her down; she ran the Honolulu Marathon when four months pregnant and continued yoga until the last day of her life. Linda exuded a sense of quiet wisdom and grace. She drew on a number of faiths to develop a deep sense of spirituality. A daily meditation practice sustained her rich spirit. She shared her knowledge by opening her home to her friends in Nanton for a weekly meditation sitting. While she learned to sit in silence and still her mind, Linda was also skilled in conscious communication and, at one point, practiced as a Community Building facilitator. She was ahead of her time in her quest for better health and nutrition. Linda was an exceptionally talented cook. An experienced gardener with a passion for healthy foods and quality ingredients, nourishing her family was one of her constant pleasures. There was thought and love in each of the meals she served. Linda was a vegetarian for 38 years, until returning to the family ranching business in a way that fit her sense of ethics. In 2003 she returned to her roots in the ranching community of Nanton. With her daughter and son-in-law she began Trail’s End Beef. Raising grassfed, grass-finished cattle and direct marketing the beef to customers was a natural fit for Linda, who had a deep environmental conscience. She had the energy and willpower to put her beliefs into action. Running Trail’s End was truly a culmination of all of Linda’s deepest convictions: a connection to the land, a commitment to the animals, and a close relationship to family. Linda will be remembered by friends in many walks of life. In Nanton, she was involved in bringing the Nathan Hornburg Memorial Skatepark to fruition; a legacy to be enjoyed by the children of the community. Her military family will remember her for her constant strength and poise. She will be especially missed by her loving family who will continue to feel her magic in the hills. Linda is survived by her daughter Rachel (Tyler) Herbert and grandchildren William and Avery; her brothers David (Cindi) Loree and Lance (Toby) Loree; her sister Mavis (Gordon) Moon, all of Nanton. She will be sadly missed by her nieces and nephews: Cobi (Brian) Johnston, Steven (Katya) Loree, Katie Zebedee (Patrick Skogman), Brady Loree, Jesse Loree, and Tessa Loree. She will be lovingly remembered by a large extended family in Alberta and BC, cousins in Ontario, and in-laws in Missouri. Linda is predeceased by her parents William and Constance Loree of Nanton and her mother-in-law Margaret Hornburg of Missouri, and her infant son Jason Chwachka. Sadly, her beloved son, Nathan Hornburg, was killed in action in Afghanistan in September of 2007. Donations in Linda’s memory may be made to the High River Community Cancer Centre or Canadian Women for Women in Afghanistan www.CW4WAfghan.ca A Celebration of Linda’s Life will be held on Saturday, February 15th at 2:00 p.m. at the Nanton Community Centre. To send condolences and view Linda’s Tribute Page please visit www.lylereeves.com . Caring for the family is Lyle Reeves Funerals of High River (403.652.4242).

Linda Loree left this life as she lived it: surrounded by the love of friends and family. Born in High River, AB, Linda grew up on her family&#8217;s Midway Ranch north of Nanton. A childhood spent outdoors fostered her lifelong love of nature,... View Obituary & Service Information

The family of Ms. M. Linda Loree created this Life Tributes page to make it easy to share your memories.

Linda Loree left this life as she lived it: surrounded by the...