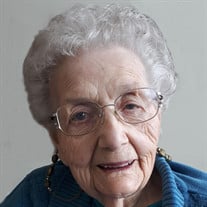 RHODES, Marion Grace McIntyre - Formerly of High River, passed away peacefully at the High River Hospital Long Term Care Facility on October 26, 2019 at the age of 93 years. She was born on February 19, 1926 in the Prospect Slope area of Reid Hill, Vulcan, Alberta to William and Beatrice McIntyre. Marion grew up on the farm, where she attended school at Prospect Slope. She excelled in music, business, and art, art being celebrated with honours. She met Glenn Rhodes from Champion Alberta and they were married on May 14, 1944. They settled seven miles east of Champion on her father's and mother-in-law's farm, George & Jenny Rhodes. Since that time, they shared many adventures from running a concession booth at Little Bow Park for two years, living in BC for a short time care-taking property, then moved back to High River and operated a trout fish hatchery. They eventually retired in High River where they enjoyed many family gatherings, travelled in their motor home, fishing and singing along the way. One of their favourite pastimes was playing cribbage together. As Glenn's health declined, Marion proved a faithful wife visiting him twice each day at High River Hospital Long Term Care Facility as a volunteer, bringing her homemade pies that she lovingly prepared to show her gratitude to the staff of the Second Floor. She and Glenn celebrated 65 happy years of life and marriage together. Marion and Glenn were blessed with four children: Terry (Evie) of Champion, Jim (Jacquie Deans) of High River, Beverly (Roger Larabie) of Claresholm, and Wendy of High River. She will be lovingly remembered by their children, 10 grandchildren and 16 great-grandchildren. Marion was predeceased by her loving husband Glenn in 2009, Marion’s parents, William and Beatrice McIntyre; two brothers Everett and Willis and two sisters Bertha and Frances, son-in-law Roger Larabie, granddaughter Jenny Rhodes and numerous in-laws. She is survived by one sister-in-law, Doreen Wiens. A Funeral service was held on Saturday, November 2, 2019 at 1:00 p.m. at the Full Gospel Church at 1802 9 Ave SE, High River, AB T1V 2A6. In lieu of flowers, contributions may be made to Rowan House, www.rowanhouse.ca or Narrow Road Home in High River Alberta, www.narrowroadhome.com, in memory of Marion Rhodes, if desired. To send condolences and view Marion’s Tribute Page please visit www.lylereeves.com . Caring for the family is Lyle Reeves Funerals of High River (Craig Snodgrass) 403.652.4242.

RHODES, Marion Grace McIntyre - Formerly of High River, passed away peacefully at the High River Hospital Long Term Care Facility on October 26, 2019 at the age of 93 years. She was born on February 19, 1926 in the Prospect Slope area of Reid... View Obituary & Service Information

The family of Mrs. Marion Grace Rhodes created this Life Tributes page to make it easy to share your memories.