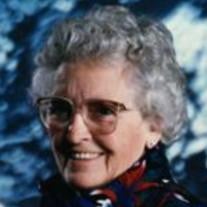 On Monday, October 29, 2012, Marjorie Elizabeth Hughes, a long-time resident of High River, passed away in the manner she lived her life, gently and quietly, at the Wetaskiwin Extended Care Centre. She was born April 25, 1916 to Tom and Dorothy Waddell of Nanton. Her early schooling was in a one room school with high school being completed in Nanton. She completed her Normal School training in Calgary and became a Governess for the Swann family until she got her own one-room school, Muirhead, west of Nanton. In 1939 she married Tom Hughes. Together they ranched, raised Hereford cattle and four children. In 1957, the family relocated to High River where Marjorie eventually resumed her teaching career as a beloved grade one teacher at the Westward School in High River, retiring in 1976. She was a faithful member of Eastern Star and St. Benedict’s Anglican church, serving on the altar guild and singing in the choir for many years. In her late eighties she reluctantly gave up her own place and moved to the Medicine Tree Manor where she never missed a Handy Van trip into Calgary, a weekly hair appointment, or any entertainment which came to the Manor. In 2009, due to failing health, she moved to Sunrise Village in Ponoka, where she quickly became a favorite of the staff for her unfailing good humour and gentle ways. She is survived by her 4 children, Allen (Deirdre), Elaine, Maxine (Dave Morris), Joan (Tom Budd), 11 grandchildren, and 8 great-grandchildren. She is also survived by her sister Mary Benson of Nanton, and her sister-in-law Esther Waddell of Eckville. She was pre-deceased by her husband, Tom in 1969, her brothers Allan and Jack Waddell, brother-in-law Lenny Benson, and sister-in-law Amy Waddell. A Memorial Service was held on Saturday, November 3rd at 1:00 p.m. at St. Benedict’s Anglican Church in High River (602 3rd St. SW). In lieu of flowers, contributions may be made in Marjorie’s memory to St. Benedict’s Anglican Church (602 3rd St. SW, High River, T1V 1B4) or the Museum Of The Highwood (Box 5334, High River, T1V 1M5). To send condolences and view Marjorie’s Tribute Page please visit www.lylereeves.com . Caring for the family is Lyle Reeves Funerals of High River (Craig Snodgrass) 403.652.4242.

On Monday, October 29, 2012, Marjorie Elizabeth Hughes, a long-time resident of High River, passed away in the manner she lived her life, gently and quietly, at the Wetaskiwin Extended Care Centre. She was born April 25, 1916 to Tom and Dorothy... View Obituary & Service Information

The family of Mrs. Marjorie Elizabeth Hughes created this Life Tributes page to make it easy to share your memories.