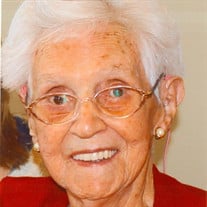 Mary Neumann Lesser passed away peacefully into the presence of our Lord Jesus on February 10, 2016, in her 95th year, surrounded by her loving family. Mary was born in the Ukraine in 1921 to Johann and Maria Neumann (nee Thiessen). As an early teen she took on the responsibilities of a parent to her four siblings. Her strong faith gave her strength and purpose through life’s challenges. Mary truly was a follower of Jesus. Mary focused on the positives, not on the many losses in her life. She will be forever remembered for her service to others, wisdom, sense of humour, and love of family. In her later years, Mary remained young-at-heart. She enjoyed travelling, visiting, and thinking about and praying for her family. Mary was quick to accept change. She always made friends easily and enjoyed connecting with those friends, both old and new. Mary and Alexander Lesser raised their family in Rosetown, SK. In retirement, they moved to Kelowna, BC. Mary’s husband passed away in 1985. She is also pre-deceased by sisters Margaret Quiring and Alice Wiens, brother Jacob Neumann, brother-in-laws Jack Klassen and Jacob Quiring, and nephew Peter Quiring. Mary remained in Kelowna before moving to High River in 1997 to be closer to her daughter. Mary is lovingly remembered by her sons Henry (Lois) Lesser and Vic (Helen) Lesser, daughter Esther (Gary) Sawatzky, her grandchildren and great-grandchildren, and nieces and nephews, as well as, many close relatives and friends. Mary is survived by her sister Ann Klassen, sister-in-law Mary Neumann, and brother-in-law Bernard (Ann) Wiens. She also made many new friends in High River at the Adult Day Support Program, Baptist Church, Friendship Centre, and Medicine Tree Manor. The family is appreciative of the excellent care she received as a resident of Long Term Care, High River Hospital. Mary was laid to rest in Kelowna with her husband. A private family service will be held in celebration of Mary’s life. In memory of Mary, donations may be made to the High River Hospital Foundation (560 9th Ave SW High River, T1V 1B3), or to MCC global relief: https://donate.mcccanada.ca Caring for the family is Lyle Reeves Funerals of High River (403.652.4242).

Mary Neumann Lesser passed away peacefully into the presence of our Lord Jesus on February 10, 2016, in her 95th year, surrounded by her loving family. Mary was born in the Ukraine in 1921 to Johann and Maria Neumann (nee Thiessen). As an... View Obituary & Service Information

The family of Mrs. Mary Lesser created this Life Tributes page to make it easy to share your memories.

Mary Neumann Lesser passed away peacefully into the presence...