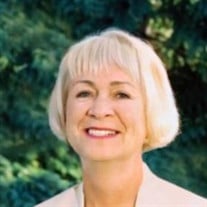 Mary Lou Margaret Hawkins completed her life’s journey on March 27, 2020. She will be greatly missed by her many friends in Toronto, Calgary and High River. She is predeceased by her brother Danny and survived by her husband of fifty years, Stephen, her two children Vanessa and Simon, sisters Lucy Anne, Cathie and Marilyn and brothers Michael and Paul. Born April 10, 1949 to Mary and Dollard Duffy she grew up in Toronto’s east end with her three brothers and three sisters. Attended St. Joseph’s primary and Notre Dame and Riverdale Collegiate High schools. In 1967 she went to Expo 67 in Montreal and with her sister Lucy Anne took passage on the Empress of England to Scotland and Ireland to visit relatives and then attend her pen pals wedding in England. Mary Lou stayed on in England and while working for a company in London met her husband Stephen. They were married in Toronto on May 2, 1970. Mary Lou was essentially a stay at home Mom to her children, living both in the Beach area of Toronto and in the town of Whitby. Her husbands career moved them to Calgary in 1990. With her children grown Mary Lou became a Home Stay Mom to numerous European, Asian and South American students who came to Canada to learn english and she became the richer for forging lasting friendships and appreciating their many cultural customs and differences. Following her husbands retirement in 2010 they moved to High River in 2012. From that first trip to Great Britain, Mary Lou’s thirst for travel began. Be it camping in Ontario and western Canada, touring the US, or vacations in the UK and European. Mary Lou loved a beach and so finding herself living in the wrong province for beaches, whenever she traveled a beach was always a high priority. Her favourite was Kaanapali beach on Maui. Mary Lou also found a personal joy in her love of animals, especially her dogs, talking to them, walking them whilst she communed with nature, laughing at their antics and individual personalities. She passed this love onto her daughter Vanessa, just as she passed her love of travelling to her son Simon. Mary Lou loved a bargain especially when it comes to clothes and what started out as a practical means of keeping her ever growing young children well dressed she would frequent rummage sales in search of bargains. Some of her rummage sale outings are the stuff of legend as friends in Toronto can attest! Once hooked on gentle used clothing she quickly developed an eye for “labels” had and extensive wardrobe and had various accounts in consignment stores in both Calgary and Okotoks. It was her wish to be cremated without a funeral service but wishes to be remembered at celebrations of her life to be held in both High River and Toronto at future dates when public health circumstances permit. Her family wishes to express their sincere appreciation of the care given by the High River Cancer Clinic, the High River Home Care nurses and the staff and volunteers at the Foothills Country Hospice. If friends so desire, memorial donations may be made directly the Foothills Country Hospice. Condolences, memories and photographs may be shared on Mary Lou’s Tribute Page at www.lylereeves.com . Caring for the family is Lyle Reeves Funerals of High River (403.652.4242)

Mary Lou Margaret Hawkins completed her life&#8217;s journey on March 27, 2020. She will be greatly missed by her many friends in Toronto, Calgary and High River. She is predeceased by her brother Danny and survived by her husband of fifty years,... View Obituary & Service Information

The family of Mrs. Mary Lou Margaret Hawkins created this Life Tributes page to make it easy to share your memories.