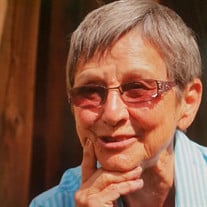 Mrs. Maxine Schlosser of Nanton, Alberta passed away at the Claresholm General Hospital on June 17th, 2018 at the age of 82 years. Maxine is survived by her husband Wayne of 63 years; sons: Ron (Les), Greg (Bonnie), Blake (Monica) daughter Tina (Gary) and daughter in law Bev. Niece Kelly Holmes. Grandchildren: Allie (Matt), Lait, Lloyd (Robin), Jessica (Ian), Kaitlan, Colter (Jenna), Stran, Reata, Shade (Kate), Payton (Nicolle), Jace. Great-grandchildren: Lanae and Liam. She is predeceased by her son Lloyd, sister Jackie, brother in law John and nephew Wesley Holmes. Maxine was born in Edmonton in 1936 and married Wayne in 1955. She has lived in the Stavely & Nanton areas since. She spent 27 years with Wayne at the a7 Gregory place where she cooked for the crew while raising a family of 5 children. Maxine was adventurous accompanying Wayne on various excursions. They moved into Nanton where Maxine owned a clothing store for a number of years, then lived and work at various ranches west in the foothills where she enjoyed riding her horse and driving the team occasionally. Over the years Maxine enjoyed sewing, gardening, pottery, quilting, and having company cooking continuously. In 2009 Wayne & Maxine bought a home in Nanton being the hub for family and friends to this day. They continued to commute to the Pekisko creek forestry spending most of the summer in the cabin or tent. If desired memorial donations may be made to the Southern Alberta Cancer Research Institute – University of Calgary, 2500 University Drive NW, Calgary, Alberta, T2N 1N4. A Celebration of Maxine’s Life will be held on Tuesday, June 26th at 1:00 p.m. at the Stavely Community Centre. To send condolences and view Maxine’s Tribute Page please visit www.lylereeves.com . Caring for the family is Lyle Reeves Funerals of High River (Craig Snodgrass) 403.652.4242.

The family of Mrs. Maxine Nell Schlosser created this Life Tributes page to make it easy to share your memories.

Mrs. Maxine Schlosser of Nanton, Alberta passed away at the Claresholm...