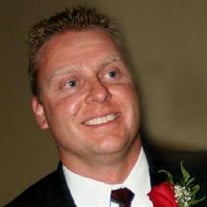 Michael Ully passed away unexpectedly near Carseland, Alberta at the age of 41 years. Michael is survived by his loving parents Don & Brenda; brothers Jason and Ryan (Kara); Nephew Brendan. Michael is survived by his Grandma Esther Lebsack (Champion), Aunts and Uncles- Uncle Brian Lebsack (Champion), Bev & Rodger Dube’ (Canmore), Margo & Brian Ully (Vulcan), Pat Street (Edmonton), Bev Ully (Merv) (Unity Sask.), and numerous cousins. Michael was predeceased by his Grandpa Victor Lebsack (Champion), Grandpa and Grandma Ed and Ina Ully (Vulcan), and Uncles Gary, Gerry, and Robert Ully (Vulcan). Mike was born in Calgary, Alberta and remained in the area for the duration of his life. Mike enjoyed being an Uncle to Brendan, and an adopted Uncle to the kids of his close friends. One of Mike’s greatest passions was spending time at the weight room, keeping his body in shape and enjoying the solitude. In the winter months he was often found playing hockey, another lifelong passion, or occasionally snowboarding. Mike spent many seasons helping seed and harvest the fields around Champion with his Grandpa Victor and Uncle Brian. He also spent many years working in gravel and concrete, or up North in Oil and Gas. Mike was a reliable friend and family member who was always there when needed. Mike had a close relationship with his parents, and always looked up to his two brothers. In memory of Michael, if desired, memorial donations may be made to the Alberta Childrens Hospital (2888 Shaganappi Trail NW, Calgary, AB, T3B 6A8). A Celebration of Michael’s Life was held on Thursday, March 24th at the High River Baptist Church (514160 – 121 St. E, East of High River off Highway #23 overpass). To send condolences and view Michael’s Tribute Page please visit www.lylereeves.com . Caring for the family is Lyle Reeves Funerals of High River (403.652.4242).

The family of Mr. Michael David Ully created this Life Tributes page to make it easy to share your memories.