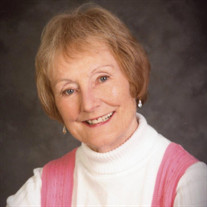 Monica Alaine Norris-Jones of High River, Alberta passed away on December 20th, 2021 at the High River Hospital at the age of 88 years. Monica is survived by her husband Lionel; son Jaye; granddaughter Kayla (Connor), and great-grandson Owen. Monica was predeceased by her son Brent. Monica was born in Nanton, Alberta where she spent her early years, moving to Calgary to complete her education. She moved on to Edmonton where she met the love of her life, they were married on January 12, 1957 spending almost 66 years happily married. Monica enjoyed a career in the radio business for 20 years, starting with CKUA in Edmonton as the first female radio personality doing the children’s program. She followed her husband to Medicine Hat where she continued with a station there and on to Calgary where she transitioned out of radio and into a new career with the University of Calgary in the Student Services Department as a receptionist. When the boys came along, being a mother was very important to Monica, doing everything possible to make sure the boys were happy and healthy, while managing a career she pioneered at the same time. Monica is fondly remembered for teaching the boys their prayers at a very, very, young age sharing her faith in God. Monica and Lionel did everything together. She followed Lionel around the province and even was part of the automobile delivery business, adventures with every stop. They loved to travel and managed to see much of the world, her favorite place was the Island of Maui in Hawaii; the Banyan Tree in Lahaina was a memory that brought smiles and stories. Reading books was a passion and a source of adventure, she was always on the hunt for a good read, at the local library or searching out local garage sales. They were well known for their dancing, you could be guaranteed that they would be at the Legion on Friday nights dancing to the live music. She and Lionel had their own unique steps and were a pleasure to watch gliding around on the dance floor. On Saturday evenings they were a part of a great group of friends hanging out at the local jam, singing, dancing and sharing good times. Music was a constant for Monica throughout her life: the radio station gigs, local jams, the TV on at home watching the Lawrence Welk Show or just listening to the music channel. Monica was a regular volunteer enjoying giving back to her community when she could, she also helped out a special young lady in her store, keeping the shelves neat and tidy and being a great friend to pass the time with. With heavy hearts we say goodbye to Monica a wife, mother, grandmother, great grandmother, sister, aunt and friend. You will never be forgotten and you will be dearly missed by Lionel, Jaye, family and friends. Memorial Donations can be made to the charity of your choice. Internment will take place at a later date. Caring for the family is Lyle Reeves Funerals of High River (Craig Snodgrass) 403.652.4242

The family of Mrs. Monica Alaine Norris-Jones created this Life Tributes page to make it easy to share your memories.