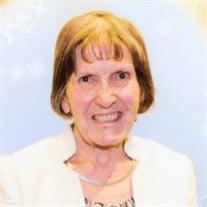 Mim passed away peacefully at Seasons Retirement Home in High River on March 02, 2021 at the age of 90 years. Mimi is survived by her beloved daughters, Brenda McMorris, Benita Percival (Gregg) and Rhonda Meadows (Jessie Michalchuk). Grandchildren, Wyatt McMorris (Christine), Alexis McMorris Scobie (Scott), Morgan McMorris Fulton (Mike), Kale McMorris (Jennifer), Chad Percival, Trina Dunn (Greg), Dane Percival ( Megan), Tyson Dunn, Rachelle Dunn, Tara Dunn. Great Grandchildren Easton McMorris, Ryan McMorris, Peyten Scobie, Corben Scobie, Dryden Scobie, Mikaela Fulton, Lincoln Fulton, Xander Fulton, Kash McMorris, Garyn McMorris, Bradie McMorris, Regan Percival, Sienna Percival, Bronsen Percival, Emberlyn Percival, Scout Dunn, Sloane Dunn, Charlie Zemanek. Sister-in-laws, Juanita Finley, Teresa Finley, Nelson and Jan Meadows, Dorothy Meadows and several nieces and nephews. Mim was predeceased by her husband of 62 years Roy, her son-in-law Gary McMorris, her parents Gladys and Milt Finley, her sisters and brothers-in-law, Mildred Finley, Bernice and Cliff Belbin, Olive and Larry Kreutzer, Virginia and Andrew Groeneveld, brothers Edward, Jimmy and Larry Finley. Nephew Dwight Kreutzer and Niece Christine Scheifele. Mim lived in High River as a child until the family moved to a farm near Gladys Ridge. She attended school at New Dunbow and after graduating high school attended S.A.I.T studying Art and Design. On February 01, 1950 she and Roy were married at Gladys United Church and began their life together on their farm 6 miles north of Blackie where they raised their 3 girls. Mimi was involved in the community Women’s Institute. She enjoyed sharing her love of cooking with anyone who stopped by Mim’s kitchen and she fed several thrashing/ combine crews during her time on the farm. She loved her flower and vegetable gardens and always took pride in her beautiful yard. She used her art talent in her ceramics projects and spent many hours crafting and creating beautiful pieces for her home, family and friends. When she and Roy retired from farming they moved to an acreage north of Okotoks and they both became involved in the Windmill Theatre Players and Dewdney Players. Mim volunteered as a set and stage designer and participated on stage in a one act play for children performing at local libraries. Her greatest joy was her family and especially her grandchildren and great grandchildren. She enjoyed attending numerous hockey games, and all sporting events her grandchildren were involved in. She loved to have them come for sleepovers and had them bake with her delicious treats to eat, and spend time with her in the garden. She was a great story teller and always had a story to tell them at their request and would play many games of hide and go seek. Mim loved to entertain and she enjoyed putting a grand meal on her table for family and friends to sit down to. She also loved her “wine time” during the summer which took place on the back deck overlooking the yard around 4:00 with some kind of delicious snack that had been prepared. Many good conversations and laughs would ensue. Mim loved to have fun and was always up for some kind of new adventure her grandkids convinced her to partake in which could be anything from neon bowling, to a riverside picnic, coaching from the golf cart, trips to Hawaii, or simply going to DQ for a chocolate dipped cone which was her favourite. After Roy’s passing Mim moved into the Heartland retirement home in Okotoks where she lived for 5 years and then moved to Seasons in High River. To Mim what she lacked in stature she may up for in her big Spirit…. rest in peace knowing you were loved by so many, we will miss your humour and that big smile. The family wishes to extend a big thank you to the care givers and staff of the Lochleigh unit at Season Retirement in High River for the compassionate and excellent care Mom received. In the absence of a gathering, the family would appreciate folks leaving a comment on the Tribute Wall about how you knew Mim and how she touched your life. Due to current restrictions a private family gathering will take place at a later date. In lieu of flowers, donations can be made to The Children’s Hospital. Caring for the family is Lyle Reeves Funerals of High River (Craig Snodgrass) 403.652.4242.

The family of Mrs. Muriel Lois Meadows created this Life Tributes page to make it easy to share your memories.

Mim passed away peacefully at Seasons Retirement Home in High...