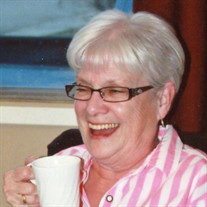 It is with deepest sorrow that we announce that Norma Johanna Peterson, 73, of Cayley, Alberta, passed away on February 19th, 2021 at Foothills Country Hospice, after losing her courageous battle with cancer. Left to cherish her memory is her son Bryan Peterson; daughter Donna (Dan) Shmyr; granddaughters Kiera Peterson and Autumn Nesbitt; grandson’s Hayden Nesbitt and Eli Shmyr. She is also survived by her brother Lawrence (Mary) Gerritsen, as well as brother-in-laws Dale Peterson and Bruce Peterson; sister-in-laws Jane Peterson, Shawney Peterson and Denise Peterson. She was born in Edmonton, AB June 13,1947 and was then adopted by her parents Johan and Ora Gerritsen, where she lived her young life on the farm in Loverna, Sask. She graduated from Westcliffe Composite School in Loverna, Saskatchewan in 1966, where she then went on to study Secretarial at Mount Royal College in Calgary AB. It was in Calgary, that she met the love of her life, John Peterson, who she married in March of 1970. They were both active members of the Stockcar Club and she loved to attend their banquets and events. In 1977, Norma and John adopted Bryan, and then Donna in 1980. These kids were the loves of her life, and then their children after that. Her grandchildren were the apple of her eye. She could always be found front and centre at every sporting event, concert or performance. Norma loved her job and all those she worked along side as a Bookkeeper for the UFA Petroleum in High River, and was there for 23 of Years. In her later years, she loved to travel. She was fortunate enough to visit many different amazing places and it was in Mesa, AZ she made new friendships and some of her most treasured memories. Norma was always there to lend a hand, or an ear and was loved by all who met her. She was known to love to dance, or battle it out in a friendly game of cards. She loved to laugh and had one of the very best. Norma’s endless capacity for love and kindness was well-known by anyone who was lucky enough to have called her family or friend. She made the world a better place for being in it. She will be dearly missed, and forever loved. She was predeceased by her husband John Peterson in the summer of 2012. Norma was always a figure of strength and dependability, who’s support or love for her family never waned. She will be deeply missed by all those who’s lives she touched in every way and in every laugh or smile. A private family Celebration of Life will be held at the Highwood Golf Course followed with the interment at the Cayley Cemetery. Memorial Donations can be made to the Foothills Country Hospice as their kindness, compassion and care was unparalleled. Caring for the family is Lyle Reeves Funerals of High River (Craig Snodgrass) 403.652.4242.

It is with deepest sorrow that we announce that Norma Johanna Peterson, 73, of Cayley, Alberta, passed away on February 19th, 2021 at Foothills Country Hospice, after losing her courageous battle with cancer. Left to cherish her memory is... View Obituary & Service Information

The family of Mrs. Norma Johanna Peterson created this Life Tributes page to make it easy to share your memories.

It is with deepest sorrow that we announce that Norma Johanna...